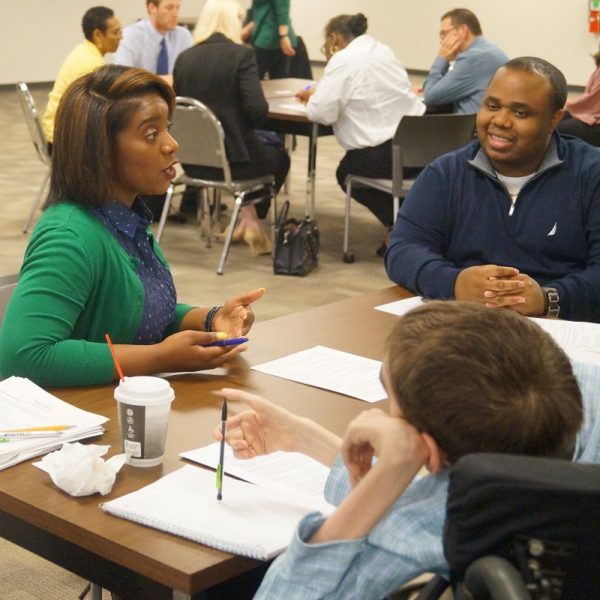 Even though things were looking a bit uncertain at around noon on April 24th, Starkloff Career Academy was able to host its largest Spring Resume Cleanup ever, thanks to some last-minute heroes.

“For the past two years, we have partnered exclusively with Boeing to host the Spring Resume Cleanup,” said Adult Career Services Coordinator Jason Hartsfield, “but this year, with increased registration and some unforeseen scheduling conflicts, our friends at Boeing just couldn’t get the volunteers we needed.”

Fortunately, Starkloff Disability Institute and the Boeing staff rallied at the 11th hour, recruiting some last-minute volunteers from CannonDesign, Olin Corporation and Royal Banks of Missouri.

The results were greater than anyone expected. Twenty-five job seekers were able to get their resumes reviewed by three, sometimes four recruiters from multiple companies.

“I think having multiple recruiters from different involved companies strengthened the event,” said Susan Menhard, Starkloff Career Academy Director. “Each recruiter has their own opinion on resumes, but each company has their own opinion on resumes too. Boeing has what they like to see just like Olin, CannonDesign and Royal Banks have what they like.”

For the HR volunteers, feedback for the candidates was very positive.

“I loved how well prepared the participants were,” said Delight Delony, Development Strategy Specialist with Boeing.  “They had their resumes and the job descriptions they were applying to ready. Some had multiple resumes for different jobs. The questions they asked were great and I think they are very prepared for interviews as well as the workforce.”

Jason Sowder, HR Director with Olin Corporation agreed, saying “I was very impressed with the positive attitude and energy of the candidates I interacted with.  It was also great to see how everyone encouraged each other and how each candidate accepted feedback with enthusiasm.”

The HR volunteers also got a chance to learn a bit more about each other.

“I gained an understanding that there are differing opinions across different organizations on what a great resume looks like,” said Paul Choi, HR Project Manager with Boeing. “I loved coaching the participants to think critically on the advice given so that they add the most relatable and best experiences to the jobs that they are applying to.”

Starkloff Career Academy wants to thank all our volunteer HR Heroes for their help:

We’d also like to thank the Center for Head Injury Services and the Destination Deserts team for hosting the event and providing such delicious snacks.