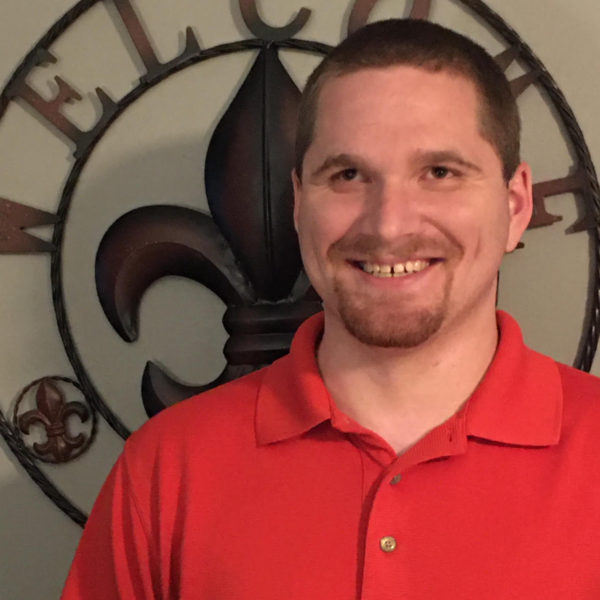 Kyle Borah was the rare student who actually enjoyed working through proofs in high school geometry, recognizing the logic in each deductive step toward a certain conclusion. That same analytical mind also helped him become an accomplished musician and a successful member of the Oakville speech and debate team.

Not surprisingly, Kyle ended up at Webster University as a double-major, earning a bachelor’s degrees in mathematics as well as computer science in 2019. This would be an impressive undergraduate resume by any standard, but Kyle had to navigate his rigorous academic path without the benefit of sight. Kyle lost most of his vision due to retinitis pigmentosa, a degenerative retinal condition he was diagnosed with as a baby.

Kyle completed his coursework through a combination of Braille; Voiceover, the screen reader built into all Mac computers and Apple devices; and MathML, the mathematical markup language that makes math accessible on the web. Support from his university played a crucial role as well.

“The access office at Webster was great. They seemed a bit stressed and overwhelmed at times, but that’s only because they’re often understaffed. They did a lot of work for me, specifically when it came to calculus,” Kyle acknowledges. “Sometimes they could scan my calculus text into a document to make it accessible, but upper-level math is full of graphs and complex examples of problems that don’t scan well. So they literally had to type those in by hand for all 20 chapters, over three years of calculus.”

Kyle hopes to use his background in math and computer science to launch a career in software development. At least so far, he’s found it exceedingly difficult to break into a highly competitive, overly saturated field.

“Social media makes it seem like it’s really easy to get a job as a developer. Just complete this six-month boot camp and start a whole new career. But in reality, they want degrees and experience,” Kyle laments. “I see a lot of job announcements with pretty unreasonable expectations. They say it’s an entry-level position, but if you don’t have two or three years of enterprise-level experience you hit a brick wall and the conversation stops.”

In an effort to jumpstart his sputtering job search, Kyle enrolled in the Starkloff Career Academy Spring 2020 Capstone Course. The lone graduate of a course disrupted by Coronavirus and forced to go virtual less than halfway through, he attended every session and participated to the fullest extent possible. He appreciates SDI’s modern take on career development.

“I’ve had some resume training and interview practice in the past, but honestly, some of that information was probably outdated,” Kyle admits. “This refresher was good, and the Starkloff training explored deeper concepts and new strategies I’d never heard before.”

Since completing the Capstone Course, Kyle has taken a slightly different approach to his quest for a career.

“SDI’s training has encouraged me to make my job search more targeted, putting the emphasis on quality over quantity,” Kyle explains. “Before, I was trying to apply to as many positions as possible, which is draining. By focusing on quality, I have a better chance of standing out among the more generic applications.”

Kyle’s coursework includes a heavy emphasis on cybersecurity, and he’s very much open to possibilities in that particular career field. He’s also considered jobs in data analytics, another area where bright, technical minds are in high demand.

But software development is in his DNA. He’s known it since his college class in Deduction and Logic. It was reaffirmed for him when he first mastered Python and began designing games with his friends. He also knows it’s where he can make the greatest impact.

“I don’t want to be some guy who comes in and tests software for accessibility once a month, someone they can forget about until it’s time to get the code base back in order for next month’s test,” Kyle declares. “Testing after the fact is fine and needs to be done, but if I can code for accessibility from the beginning, then that’s even better.”