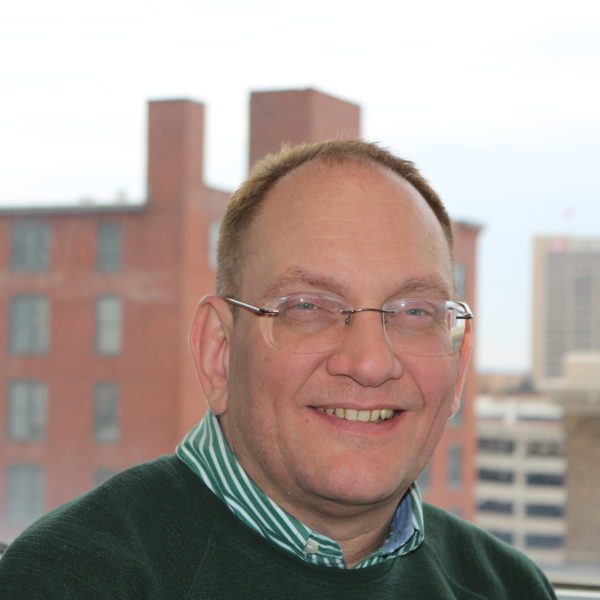 Sometimes it pays to show up for the company holiday party, literally.

Then, as luck would have it, she suddenly spotted a familiar face at the organization’s holiday party — that of former SDI staffer Scott Thompson.

“I bumped into Scott at our holiday party; he came as a guest of our team member, Steve Foelsch,” Lori recalls. “Scott was wrapping up a one-year gig as the United Way campaign coordinator at Bayer. He told me that he raised $3.4 million in two months. I asked him what he was doing in January and if he was interested in coming back to SDI. ‘Maybe,’ he replied. And I saw my opening.”

He didn’t necessarily expect to be back at SDI, especially in a fundraising capacity, but for Scott, the timing was impeccable.

“This most recent opportunity with SDI came up at the right moment because my contract with Bayer was running out,” Scott says. “For them, it’s really more of a seasonal position, so it wouldn’t be starting back up again until May.”

Scott served as SDI’s Director of Operations from 2010 to 2015. He then spent three years in an operations role at the Christian Activity Center, an organization providing educational, recreational and faith-based programming to youth in East St. Louis. Scott felt inspired by the efficient manner with which the CAC converted its resources into impactful direct service.

What could an organization like that accomplish with even greater financial support? It got Scott thinking about the fundraising side of things.

At this point, Scott was ready to pursue positions in the development realm, but he knew he needed more hands-on experience with fundraising. Leading the United Way campaign at Bayer presented the perfect opportunity to learn on the fly in a supportive environment.

“It gave me a kind of sandbox to play in, a safe place where I could practice and try things,” Scott acknowledges. “It was a bit experimental. I didn’t always know if things would work or not, but they generally did in the end.”

Scott orchestrated a fundraising effort that reached a massive pool of prospective donors on a very focused, individual level.

“We put together a directed employee-pledge campaign where we used a lot of segmented variable outreach to people,” Scott explains. “We identified people based on their giving capacity, giving history and where they were at in the organization. We really tried to personalize things even though we were soliciting from a large group of about 4,500.”

The success of his campaign at Bayer gave Scott the last bit of confidence he needed to seamlessly transition into his new role as our Director of Development. Aside from the lofty dollar figures Scott’s work at Bayer generated, Lori admires his overall resourcefulness and dependability.

“Hiring Scott was a no-brainer. We already knew his abilities,” Lori remarks. “He is a little bit like MacGyver (if you’re over 40, you know who this is): He can fix anything with what he finds in his desk drawer, he will tackle any problem and he always has your back. You could not ask for a better team player.”

While planning and setting goals are important, talk only goes so far, according to Scott. Connecting with donors is a comprehensive, continuous process requiring a proactive and timely strategy.

“We have to follow up with people at certain times. We have to communicate certain messages. That’s how the development machine works — it’s a cycle of action,” Scott describes. “With our mission, hopefully donors want to walk down the path with us. We have to be out front showing them that our quest is consistent with their values because they’re the lifeblood that allows our organization to move forward.”

The arrival of Scott allows Lori to focus more on the big organizational picture. It also makes her official job title a little shorter, a change that’s welcome if not a touch bittersweet.

“I feel a bit nostalgic about handing over the reins of Director of Development because that was my title when I began at SDI in 2013,” Lori reflects. “But I recognize that this is the team that can take our fundraising to the next level. While I will still be involved with fundraising and ensuring we’re meeting annual goals, the additional time allows me to focus on larger organizational priorities and more distant horizons.”