A handful of “yeses” brings Sarah Schwegel closer to her passion 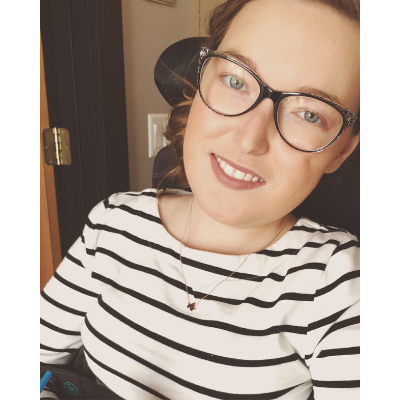 “Something that’s happening in the SMA community online is that we’re reclaiming it from SMA awareness to SMA pride,” Sarah boasts. “It’s great to know about the disease, but let’s also be proud of it. Let’s celebrate our disability and all the amazing things it’s given us.”

As the leading genetic cause of death among children under 2, SMA is a rather bleak prognosis. The loss of lower motor neurons in the spinal cord results in diminished muscle tone and strength, limited mobility, delayed gross motor skills, scoliosis, difficulty eating, swallowing and breathing, and tragically, a shortened lifespan in many cases. When she was first diagnosed at 18-months old, Sarah’s doctors didn’t expect her to survive beyond young adolescence.

But Sarah’s made a career of exceeding expectations; her can-do spirit evident even as an infant.

“By the time I turned 2, the neurologist looked at my mom and said, ‘Oh, you better start saving for college,’” Sarah recounts. “That was a cool and empowering moment for my family.”

A handful of treatment options designed to help preserve lower motor neurons and prevent muscle cell death have recently become available, including the first-ever oral medication for SMA that can be administered at home.

But therapy and exercise were Sarah’s only treatment options growing up, and she took full advantage of them. In addition to regular physical and occupational therapy sessions, she turned to horseback riding and swimming as methods for maintaining strength and range of motion. Sarah was active in the Girl Scouts as well, until she gave that up to pursue a passion for power soccer.

“I kept really active because we knew the more I used my muscles in any capacity I could, the longer they would stay strong and the more function I would have as I grew up and became an adult,” Sarah explains.

Every year from ages 6 to 17, Sarah attended Muscular Dystrophy Association  Summer Camp, a week-long sleepaway camp for young people with muscular dystrophy and related diseases. For Sarah, it represented more than a recreational retreat; it set the stage for a lifetime of independence and self-advocacy.

“If I hadn’t gone to camp, I don’t know if I would’ve been able to live independently or make it through college,” Sarah reflects. “Having that week every summer where I had to direct my own care and really execute that independent living philosophy in a real-world setting was so incredibly helpful.”

When it came time to think about colleges and majors, Sarah’s path seemed a bit unclear.

As a young girl she dreamed of being a veterinarian, a common childhood phase she eventually grew out of. Her experience living with SMA made occupational therapy a logical career choice, but Sarah soon realized that clinical work wasn’t her calling.

In addition to classes, Sarah capitalized on every opportunity throughout college. She cofounded the Able-Disable Alliance at Maryville (ADAM), a student-led disability advocacy group now known as ABLE (Abolishing Barriers Through Leadership and Empowerment). She served as Secretary of Public Relations for Student Government, and she joined the Committee on New ‘N Existing Campus Traditions (Maryville CONNECT). Sarah’s level of campus involvement surprised even her.

“People just saw something in me, some leadership quality I didn’t know I had,” Sarah concludes. “I’m thankful for the people who encouraged me to get involved because it really helped me become who I am today.”

Every winter and summer break included a practicum or internship of some type, providing her with a complete spectrum of insights and experiences.

“I did my first practicum at MDA and realized that was too clinical of a setting for me, which is exactly why you do practicums and internships,” Sarah acknowledges. “When I did my internship with SDI in 2015, I was like, ‘Yeah, this is it!’ I loved being part of a disability-led organization, and it definitely fit with who I am and who I want to be.”

During Sarah’s internship at SDI, Colleen encouraged her to attend the National Council on Independent Living (NCIL) annual conference. It proved to be a career-defining moment for Sarah.

“I was like, ‘Yep, sign me up!’ That was when I decided I wanted to go into the public administration, nonprofit management and public policy aspects of things,” Sarah recalls.

Sarah graduated from Maryville in 2015 and was accepted into the Public Administration graduate program at St. Louis University. As she chipped away at her master’s degree, she also gained valuable experience working for Nestle Purina, initially as an external HR representative and later in diversity and inclusion.

She returned to SDI as a practicum student in 2017 to help launch the DREAM BIG pilot, a program she would eventually lead after completing her Master’s and being officially hired as Youth Transition Coordinator at SDI in 2018.

“I got the job at SDI about three weeks before camp started. Fortunately, we had a great group of interns who helped design the curriculum and get things planned that year,” Sarah remembers. The next year, I was able to work with Steve (Foelsch) and the rest of the staff to really mold the program and decide what we wanted it to look like moving forward.”

As much as Sarah loved working with kids, public policy and disability-rights advocacy continue to be her passions, occupying large chunks of her free time. When a public policy and advocacy specialist position opened up at Paraquad in late 2019, Sarah couldn’t resist. Her new role is a mix of systems advocacy and grassroots organizing, things she used to do for fun after work.

“Some days I’m really deep into policy and procedure, advocating before members of the legislature. Some days I’m drafting templates of letters for other disabled advocates to use when contacting their legislators. Other days I’m giving presentations on Medicaid expansion and voting,” Sarah describes. “It’s all over the place, but I’m passionate about these issues that are so important right now.”

Sarah’s made a lifelong habit of saying “Yes” to new opportunities and not being afraid to take on new responsibilities.  It’s helped her reach a challenging and rewarding peak in her career.

“I think employers really look for folks who take initiative. If someone asks you to do something, don’t just do it. Do it better than they expect,” Sarah urges. “My internships and work experiences not only taught me some marketable skills, but they also allowed me to demonstrate my willingness to work hard and exceed expectations. Hiring managers recognize that.”