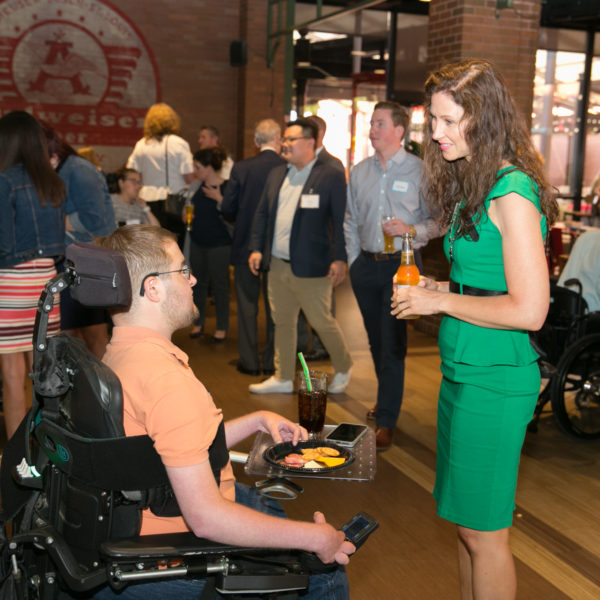 Job seekers with disabilities and HR professionals from various corporations gathered at the Anheuser-Busch Biergarten on July 23 for our Accessible Networking Happy Hour. The evening included a social hour complete with delectable hors d’oeuvres and cold libations.

Several rounds of “speed networking” followed, where HR personnel rotated from one job seeker to the next, spending five minutes to become acquainted with each candidate before moving on to the next one.

One of the disabled job seekers in attendance, Tiffany Eickhoff, enjoyed the informal yet productive nature of the event. “Everything was pretty laid back,” Tiffany says. “With the five-minute time limit, you might think that it would be more stressful, but it was really quite the opposite. There wasn’t much pressure … it was really just a series of conversations, and I made a lot of professional connections.”

As the name suggests, accessibility was a top priority for the event. Job fairs and networking functions often present logistical challenges for job seekers with disabilities, so SDI ensured that sign language interpreters, sighted guides and wheelchair access would be available for the happy hour.

Jason Hartsfield, Adult Career Services Coordinator at Starkloff, explained that although SDI made it a point to provide every possible accommodation for the event, job seekers with disabilities have intrinsically learned to come prepared to meet barriers head-on.

“We have a great deal of faith in the ability of our participants to be adaptable,” Jason says. “We try to make things as accessible as possible, but we also know that a lot of the people we work with already have their own strategies in mind,” he explains. “They’re experienced people with disabilities, and they know how to work under difficult circumstances. They do it on a daily basis.”

Disability that isn’t obvious is an often overlooked fact that played out during the event. A moment that could have been awkward or uncomfortable ultimately proved both educational and actionable.

“A couple of people with invisible disabilities presented themselves so well that no one was talking to them. The HR people didn’t realize that they were job seekers,” Jason recalls. “Once everyone became aware of it, they were able to participate fully in the networking, but it served as a great lesson for both sides.”

While the 17 job seekers arrived enthusiastic and motivated, they represent only half of the equation for a successful networking event. “You need engaged employers,” Jason says. “If employers are not engaged, the job seekers know it,” he explains. “They can sense when the employers aren’t interested in talking with them, and it gets uncomfortable because they can feel it’s being forced.”

Tiffany noticed right away the positive energy and earnestness exhibited by the participating HR professionals and corporate representatives. “It was very clear that everyone was happy and wanted to be there,” Tiffany reports. “It’s not always that way, but in this case they definitely seemed to enjoy talking, listening and getting to know the candidates.”

Jason says the planning, structure and pace of the event made it truly accessible to everyone in terms of differing personalities as well as disability. “Whether or not disability is a factor, you always have people who are eager to approach a conversation and people who are not. I think having structured networking events like this really evens the playing field for everybody.”