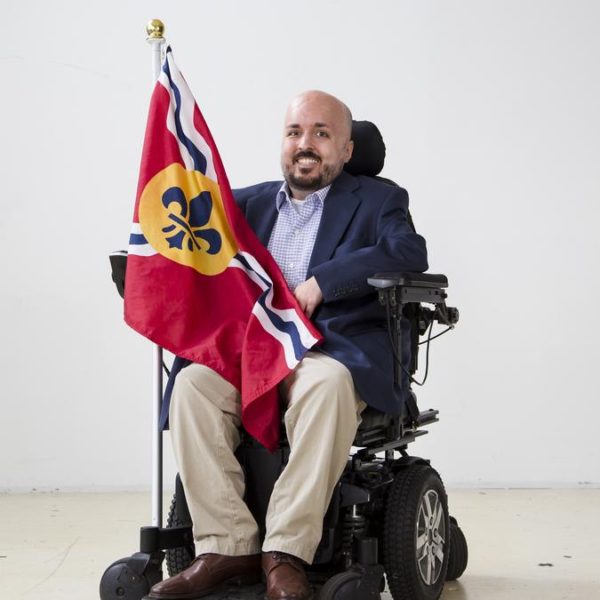 Brian Chao has subscribed to the St. Louis Business Journal for years now, since he was a teenager in fact. He always made note of the 30 Under 30 list they printed every year, glancing through the names of the rising corporate and entrepreneurial stars recognized.

Nothing’s changed in 2019. Brian still pays for his subscription, still enjoys the articles and features. This year’s list did contain a familiar name, however. It was his own.

Brian Chao, Chief Financial Officer of the Starkloff Disability Institute, appeared in the St. Louis Business Journal’s 30 Under 30, a prestigious honor that recognizes him as one of the city’s most dynamic young business leaders.

Lori Becker, Chief Operating Officer and Director of Communications and Development at SDI, said Brian is more than deserving of such an award.

“Nominating Brian for the 30 Under 30 was important because he deserves widespread recognition for his accomplishments,” Lori says. “As CFO, Brian has helped the organization increase its transparency, led us through our first external audit and instilled true confidence that our organization’s financial well-being is in the hands of an expert.”

Brian, who lives with muscular dystrophy and uses a wheelchair to get around, credits Starkloff with putting him in an ideal position to succeed.

“First serving on their board and now working as CFO, SDI has allowed me to apply my professional skill set in support of something I’m passionate about,” Brian says. “If not for the ability to have that outlet, I’m not sure I would have received this honor.”

As an undergraduate, Brian attended Washington University’s Olin Business School, where he studied Accounting as well as Organization and Human Resources. After earning a Master’s in Accounting in 2013, Brian enrolled in The Next Big Step, now known as the Starkloff Career Academy Capstone Course.

Brian says the course provided a learning component that was missing from his traditional educational experience. “It helped me learn how to talk to employers and be comfortable with my disability,” Brian notes. “It gave me a disclosure strategy that helped me become a more successful job seeker, more so than any kind of career counseling I had received during undergrad or graduate school.”

After completing the Capstone Course, Brian’s resume was passed around to a few different companies. He eventually interviewed for and landed the position of Internal Auditor at Enterprise Bank and Trust, a job he held for two-and-a-half years.

Brian wasn’t necessarily looking for a new opportunity. He enjoyed his work at Enterprise Bank, and his employer was more than willing to provide reasonable accommodations when needed. Still, he found himself in a candid conversation with Lori one day following a board meeting. The topic was how to take Starkloff to the next level.

“After talking for a while, Lori and I realized that what she really needed was someone to come in and be the financial expert,” Brian said. “If I could handle the business side, then she could focus on communication, fundraising, development and managing all of the different SDI program areas.”

Little time was wasted in implementing this new plan. Brian accepted the role of Business Manager at Starkloff in April of 2017. Brian held this title for nearly two years, until he was promoted to CFO at the beginning of this year.

The traditional approach to career counseling and development places a great deal of emphasis on the so-called five-year plan, but Brian encourages people to remain open-minded. After all, had he stuck to his own five-year plan, he likely would have missed out on the success and fulfillment he now enjoys at a disability-related organization in the nonprofit sector—SDI.

“Don’t be afraid to take that jump. It may seem uncertain, like it’s not part of the plan, but life doesn’t go according to plan,” Brian reflects. “I love coming to work every day and being part of such a great team. It’s the honor of a lifetime to be able to apply your professional skills to something you’re passionate about.”

In addition to his financial expertise and experience, Brian also serves as an energetic and unabashed example of the spirit that inspired the Starkloff Disability Institute to begin with.

“Not only is Brian raising the bar at SDI, he is raising the roof all over town,” Lori says. From mosh pits and music festivals to the city’s most sophisticated dining, Brian likes to be seen. And it’s part of our mission for people with disabilities to be seen everywhere.”