Bringing Awareness to an Underestimated Disability 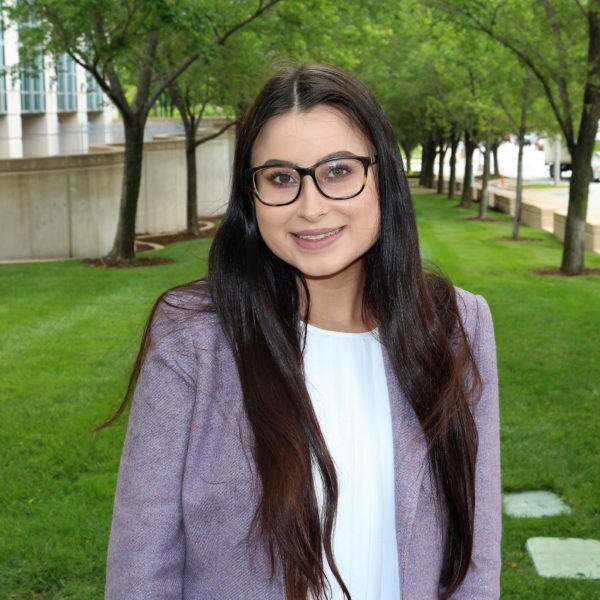 Severe stomach pain, brain fog, uncomfortable bloating and constant trips to the bathroom – the symptoms seemed only to intensify as Katie Fields attempted to settle in as a freshman at Webster University.

Although she did her best to manage this mysterious new ailment, she eventually found herself too sick to attend classes, an outcome that a devoted student like Katie simply couldn’t live with. After consulting her doctor and experimenting with a series of elimination diets, Katie was diagnosed with Celiac disease.

For people with Celiac disease, the presence of gluten elicits an immune response that damages the small intestine and can lead to serious long-term consequences if left untreated. Gluten is a protein found in grains — primarily wheat, barley and rye. For Katie, who now serves as SDI’s College Outreach Coordinator, cutting gluten out of her diet produced swift and profound results.

“I began feeling better within two days of eliminating gluten,” Katie recalls. “Within the first month, I ended up gaining some weight because my body could finally absorb nutrients.”

May is Celiac Awareness Month, and for an underdiagnosed condition like Celiac, simply getting the word out can make a huge impact on people’s lives.

“Symptoms can appear at any age and develop over time. A lot of people don’t even know they have it. They go on destroying their intestines, not knowing that gluten is the culprit,” Katie explains. “There’s no medication or treatment other than eliminating gluten. That’s where the relief comes from.”

But gluten is seemingly ubiquitous in the American diet. While many grain-based staples like bread, pasta and cereal are clearly off the table for people with Celiac, gluten finds other, less obvious ways to sneak onto the plate. Things like soy sauce, various types of condiments and salad dressings contain wheat.

Naturally gluten-free foods like oats can be rendered unsafe if they come in contact with wheat, barley or rye during processing. Single-ingredient seasonings like parsley and even certain medications can contain traces of gluten, so Katie encourages people with Celiac to remain vigilant about anything they consume.

“Gluten’s in almost everything. You don’t realize it until you start reading food labels,” Katie laments. “Gluten isn’t one of the top eight allergens a food manufacturer has to list on the label, so it can creep in there without you knowing. You have to be good about recognizing what’s on the food label, or take the initiative to reach out to the company if you’re not sure.”

Going out to eat might seem impossible with Celiac disease, but according to Katie, there’s an app for that.

“I don’t go to a restaurant unless it’s on ‘Find Me Gluten Free.’ It’s like a directory of thousands of restaurants from across the world that serve gluten-free food,” Katie describes. “Users can leave reviews and share cooking practices. Through the app, I’m able to plan out my meals when I travel.”

Online support groups have been a crucial part of Katie’s adjustment to Celiac as well. She says sharing her gluten-free journey with a community of like-minded people has been a great source of insight and perspective.

“You really need to be involved in one of these online support groups to understand the ins and outs of it. I’m thankful, because I’d be accidentally eating a lot of gluten otherwise,” Katie acknowledges. “I feel pretty safe now, but it would’ve been a lot harder if I didn’t have these groups to lean on and learn from.”

The dietary restrictions necessitated by Celiac can begin to feel punitive at times, so it’s important to savor the small victories whenever they occur. For instance, when Katie discovered a gluten-free version of Kraft Macaroni & Cheese, she snapped photos of the nine boxes she ordered and plastered them all over social media for her gluten-free friends to see.

“Nobody understands my wins quite like the people in my Celiac group,” Katie reflects. “Whether it’s online or in person, being able to share those wins and resources is really crucial. You have to seize that excitement and joy amid the mess as best you can, and the best way to do that is to find other people who are going through a similar thing.”

Individuals newly diagnosed with Celiac might feel reluctant to discuss it with friends, family, professors or coworkers. While it comes down to personal choice, Katie says engaging in an honest dialogue offers its own sense of relief.

“If you don’t have symptoms, then maybe you don’t need to share it. But if you’re like me, just trace amounts of gluten can make you sick, so that’s when it’s a good idea to be upfront about it,” Katie suggests. “It’s not anything to be ashamed of; it’s just your reality. It’s better to get that information out on the table because it gives people an opportunity to learn.”