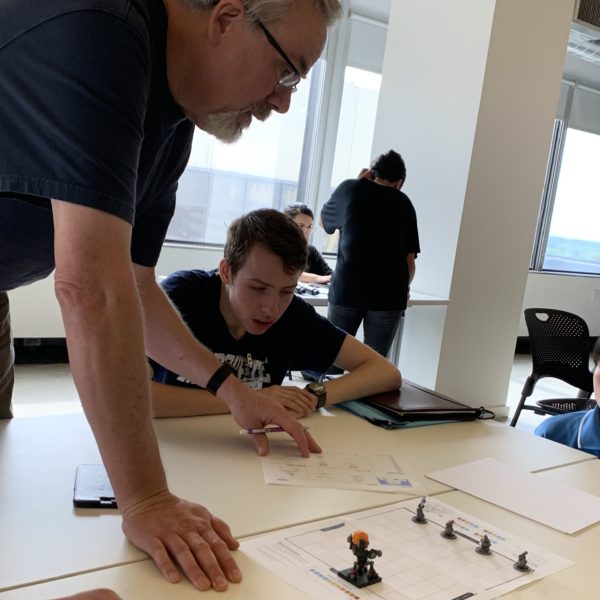 Designing Your Career at Riot Games

By Annie Donnell and Dylan Farmer

DREAM BIG participants visit Riot Games today. The company has 3,000 employees and based in twenty-two countries.

Students began the day with a hands-on activity with Riot employees creating a game company, and figuring out what types of games the company specializes in. Each group of two students worked with one mentor at Riot to help create the game. Students brainstormed game company names including Ace Games, Heavyweight Entertainment, and Epic Adventure Games.

Students then programmed a robot using speck sheets with different actions including turning right, turning left, crush, face tank, and use lazars to compete against four tanks. The tanks represent game players. The robot and tanks rotate turns throughout the game. Students practiced creating the game and had an opportunity to play the game after programming. Game designers played multiple versions of the game to ensure balance for both the robot and tanks or game pieces. It takes trial and error to change the actions and modify the program to ensure tanks have a chance to win and lessen the strength of damages for tanks. Riot Games focuses on a supportive environment and fosters a space for everyone to share their own creative ideas. Students seem to enjoy this activity. After the activity, Michael explained how, “The best part was modifying the moves each time because it is important to be precise.”

Alex stated, “Balance is a lot trickier than we thought it would be. We had to make sure our game was even and had an equal amount of damage.”

Students participated in a Battle Royale where each team played to see which game board actions beat the robot. Students were actively engaged, and excited to see who wins. Each team used the game actions they created earlier during game design with Riot mentors. One captain from each team had the responsibility to move the game pieces on the board.

Afterward, Riot Games employees explained their career paths and their journeys to how they got to Riot Games through a panel discussion. Departments involved on the panel include software engineering, IT, office management, education program team, event engagements, and diversity and inclusion. Students learned a lot and asked great questions to learn about the gaming industry.

DREAM BIG wrapped up a successful week with poster presentations where students reflected on their experiences throughout the week and a graduation where they received certificates with families present to watch. We can’t wait to share you more later this month during Week 2! Signing off!