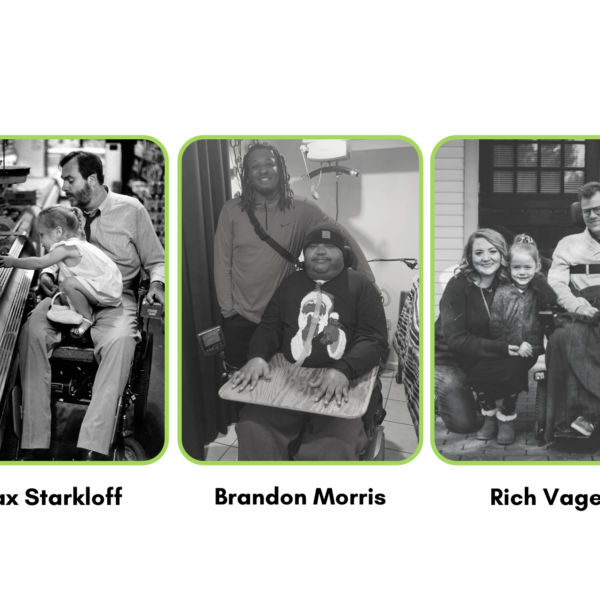 The remarkable tale of resilience, romance and tireless service to others, Max Starkloff and the Fight for Disability Rights written by Charles E. Claggett, describes how Max escaped incarceration in a nursing home to become one of the most prolific disability rights advocates of all time. But in between all the advocacy efforts, legislative sessions, and public speaking engagements, Max and Colleen were just husband and wife – two people who shared the same hopes, dreams, and uncompromising love for one another.

These hopes and dreams included having kids, they longingly wanted to start a family of their own. Although they ultimately succeeded in adopting three beautiful children, the path to parenthood was littered with the same types of misconceptions and prejudices people with disabilities encounter in so many other aspects of life. Charlie Claggett documents this part of the Starkloffs’ story in his book as well.

After a year of seemingly endless paperwork and adoption agency red tape, Catholic Charities denied the Starkloffs’ application. Colleen vividly recalls the case worker’s visit to their home to deliver the bad news.

“She said it was because Max can’t play ball with the child,” Colleen said. “They felt that Max could not possibly be an effective father because he couldn’t play catch,” Colleen repeated, incredulously.

“She also told us that a doctor had told her that because of Max’s disability, he would probably die early of renal or kidney failure.” At that point, Max said to me, “Get her coat, sweety. She’s leaving.”

These are offensively misguided notions, of course. People with disabilities can be and are parents. In honor of Father’s Day, we’re sharing thoughts and reflections from fathers with disabilities.

Only 10 months after the birth of his son Christopher, a gunshot wound rendered Brandon Morris quadriplegic. Brandon experienced an array of intense emotions during this period of his life. Interestingly enough, Brandon shared some of the same misgivings expressed by the Starkloffs’ case worker from Catholic Charities years earlier.

“In the beginning, one of my most difficult realizations was not being able to toss the ball around and play in the athletic arena with my son,” Brandon admits. “I grew up playing sports – football, baseball, basketball – and most men, we think about having a son to shoot hoops with and pass down some of those skills.”

But Brandon found other ways to remain involved in his son’s athletic pursuits. Brandon was a constant presence on the sidelines of football and basketball games, as opposed to the many nondisabled dads were no-shows.

Brandon’s relationship with Christopher steadily grew stronger over the years, despite eventually having to split time with a step-father. Although the step-father’s occasional involvement stirred up some feelings of inadequacy, Brandon firmly believes his son benefitted from having a pair of solid male figures in his life.

“Sometimes it felt like a competition, like I just came in second when it comes to dads,” Brandon acknowledges. “But on the other hand, I wouldn’t change the circumstances that allowed Chris to have a good step-father. As a man, I salute him for being a positive influence on my son.”

Christopher’s development as a responsible young man became evident following a family vacation to Las Vegas. Since 2005, the annual trip to Vegas had become something of a Morris family tradition. But the sudden passing of Brandon’s father in 2015 threatened to put an end to their happy excursion. Not only was Brandon missing his best friend and confidant, he would be without his primary support person for the trip.

But Christopher rose to the occasion when the Morrises returned to Vegas in 2016. After an unfortunate incident that resulted in Brandon being spilled from his chair during a botched transfer, Christopher took control of the situation. He deftly instructed the airport employees and first responders on how to execute a safe and secure transfer, proving to his father that he indeed was paying careful attention all along.

“Sometimes, even when you’ve seen something your entire life, you still might get a little nervous when it’s your time to step up to the plate. But he stepped up in a major way,” Brandon proudly recalls. “Over that entire trip, my son and I really bonded. He showed his leadership, he showed his love, and that’s a moment I’ll never forget.”

The prevailing assumption is that managing a disability is hard enough, let alone taking on the added responsibility of being a parent. The list of potential obstacles and complications is simply too great. But Rich Vagen, who uses a wheelchair and has a nine-year-old daughter, never saw fatherhood that way.

“We don’t think about the challenges so much. They’re just things you roll with. We just adapt, like we do with everything else,” Rich explains. “I think more about how the disability strengthens my relationship with my daughter. We never used a stroller when she was little; she always just sat in my lap. I think that proximity has made us really close.”

According to Rich, his disability in some ways has instilled increased independence in his daughter.

“It’s given her more confidence in certain situations,” Rich points out. “If she wants to go play in a part of the park that I can’t get to, then she’s got to work up the courage to go do it herself.”

As Rich’s daughter has gotten older, their relationship has been further solidified by how disability encourages them to work as a team. For instance, they recently explored the attractions of Chicago, using public transportation to navigate the city. The trip holds fond memories for Rich.

“It was one of those things where I couldn’t reach the pad to swipe the bus pass, so she took care of it,” Rich recounts. “It’s like she’s my little partner. It all works out.”

The bond they share has ultimately made Rich’s daughter fiercely protective of dad, something Rich laughs about often. He recalls a particularly comical moment when her protective instinct took over.

“We were at a birthday party, and there was a step to get inside. People always assume they can lift the chair, and a guy started trying to figure out how he would do it,” Rich remembers. “As soon as he did, she started yelling, ‘Do not touch his chair!’ It was pretty funny.”