Chuck Graham will never be forgotten 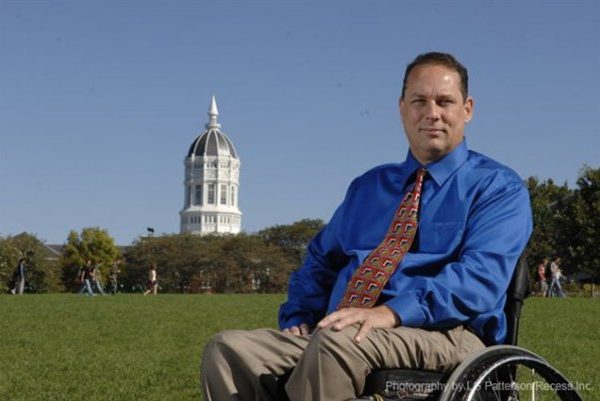 Starkloff Disability Institute salutes the life and advocacy of former Missouri Representative and state Senator Chuck Graham, who passed on May 19, 2020.

Chuck is probably most appreciated and famous for creating the men’s wheelchair basketball team at the University of Missouri (Mizzou) in Columbia, but he was a local, Missouri-wide and national Advocate for all people with disabilities. He influenced both the creation of the Americans with Disabilities Act of 1990 and medical parity policies.

Chuck’s experience with disability did not begin with the car accident at age 16 that damaged his spine. He first experienced disability and didn’t even recognize it.

According to a 2012 article written in the Missourian, both Chuck’s father and younger brother Drew experienced being bipolar and using legal and illegal substances. His mother had muscular dystrophy and was trained as a nurse and according to the Missourian article, “She kept the family functioning.”

Although knowledge and experience has increased today, the stigma and stereotypes of mental health issues still exist causing family impact. Much of this stigma and other problems people have to contend with is having a type of ‘hidden disability.’

Visible disabilities are obvious, like a broken leg or being a quadriplegic. People immediately understand that these people with visible disabilities require treatment, equipment and other accommodation. But a person with a mental health issue, or another type of hidden disability, is perceived as not trying hard enough, not having the right attitude, unreliable and even being weak and uncooperative.

Unfortunately, our decisions are based more on perceptions and the profit motive than on fact. The United States’ medical and medical insurance structure and policies are based on our society’s negative perceptions of reality.

Just imagine if you went into the dentist in agonizing pain and, after being examined you are given the prognosis that the pain is all in your head. Would you accept that uneducated, discriminatory, paternalistic indifference to your pain?

Thanks to Chuck Graham and many other advocates, mental health has gained parity even in the Affordable Care Act. If people with mental health issues begin to receive the treatment and equipment they need, they will be able to escape the bonds of stigma and isolation. They will interact with their communities more frequently and increase knowledge, empathy, laws and policies helping others.

Chuck was both a Missouri and national advocate for all people with disabilities. He was also involved with the early development of the ADA Center, and his last position was as their principal investigator and codirector.

Thank you Chuck Graham for not only your leadership and advocacy, but for the example of your extremely active lifestyle, sense of humor and compassion.