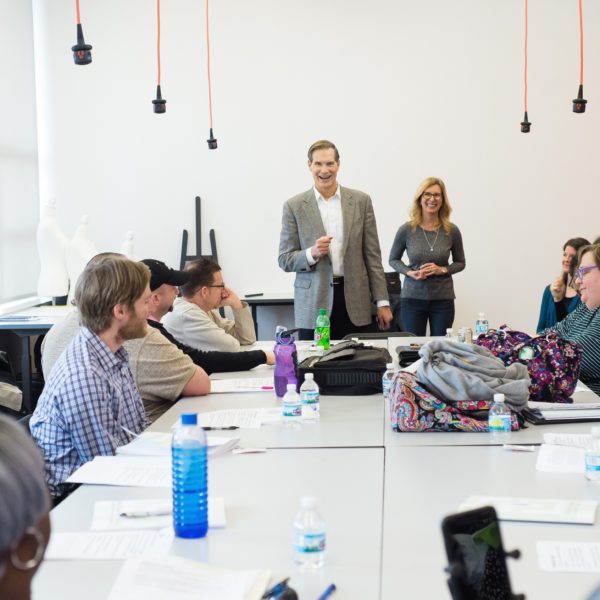 This is the second time the Starkloff Career Academy has partnered with COCAbiz, a business consulting service offered by the Center of Creative Arts that uses artists and actors to expand the creative thinking and leadership skills of businesses leaders. Clients of COCAbiz include BJC, Nestle Purina and Bayer.

The Starkloff Career Academy is always excited to work with COCAbiz, and we want to share some of what we’ve learned. COCAbiz knows successful job seekers need to be good conversationalists. The more engaging a conversation you have, the more likely you are to remember it. With that in mind, here are three COCAbiz-approved ways to make your conversations more engaging.

On the first day of the training, candidates worked with Emmy-award winning actor and director Ed Reggi. Reggi trained at Chicago’s famous Second City and taught the class various techniques used in improv. Among his favorite is “Yes, and…”

“Yes, and…” works like this. Someone makes a comment such as, “It’s a nice day out.” You agree with them then add to their comment. “Yes, it is a nice day out, and I love warm days like today.” In improv, two or more partners use “yes, and…” collaboratively to craft a scene. In your conversations, you can use “yes, and…” to make yourself more engaging.

For example, Sam is asked in an interview, “Do you have experience working with diverse populations?” Sam answers by telling a story about an experience she had with a diverse community at a past job. She then continues the conversation by asking her interviewer how the company approaches diverse populations. By using “yes, and…” Sam demonstrates her interest in the company and has a more engaging conversation with the interviewer.

Day two of COCAbiz was spent with author, teacher and poet Susan Grigsby. Grigsby taught the class the value of metaphors in story-telling. Metaphors add imagery to your stories. Saying “We had a lot of customers that day,” isn’t as vivid as saying “Customers were coming in like a flood.”

Metaphors also allow you to quickly conveying an idea that might otherwise take some time to explain. A font-end web developer might describe his role by saying “I put the paint on the building and make it pretty so people will come inside,” while a back-in developer might say “I make sure the lights come on and the toilets flush.” This imagery quickly conveys what these web developers do without going into complicated details.

On the final day of the training, actor and director Lee Ann Matthews led the class in script-reading exercises. She explained how the pitch and tone we use to tell a story changes its message.

Matthews encourages job seekers to identify what their objective is when telling their stories. How do you want your audience to feel about you, and what do you want them to remember? Actors like Matthews “score” their scripts. They highlight the words they want to emphasize and places they want to add a pause. Then they practice and make adjustments to their scoring until they are confident their message will get across to the audience.

When practicing your stories, Matthews says to get your whole body into it. Read your script out loud, and move your body as if you were actually in front of your audience. You’ll develop a muscle memory for your story this way, making it easier to remember once the time comes to deliver it.

Capstone Course candidates found the training to be highly valuable. Almitra Johnson stated the COCAbiz training “got me to do things I never thought I would do.” Another candidate said, “When I started, I was stressed with the idea of interviewing. Now I’ve learned I don’t have to be as stressed and I can be myself.”

The Starkloff Career Academy and the candidates of the Spring 2019 Capstone Course want to thank COCAbiz director Steve Knight and presenters Ed Reggi, Susan Grigsby, and Lee Ann Matthews for all their hard work and valuable insights.

To learn more about the Center for Creative Arts and COCAbiz, visit their website at www.cocastl.org.