Colleen Makes Our Voices Heard At The 2017 NCIL 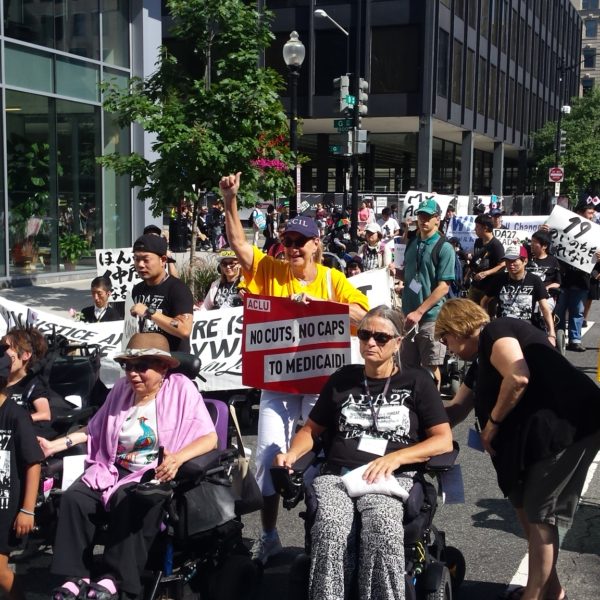 This year’s National Council on Independent Living (NCIL) conference on July 24th was jam-packed with very important, substantive and historic activities and events. Our own Colleen Starkloff was there for us and made her voice, therefore our voices heard. The conference included tracks focused on international development of independent living centers as well as current issues confronting the U.S. disability community.

The Disability Rights Movement has been an international movement since the early 80’s. It has been gaining momentum, largely supported by international exchange visits with leaders and advocates from nations around the world. They have dedicated their lives and careers to advancing the rights of persons with disabilities in their countries.

This year’s NCIL conference began with a Global Summit on Independent Living on Sunday, July 23rd.  By day’s end, the attendees had listened to amazing stories of what is happening in various nations to create or advance rights for disabled people in countries like Japan, South Africa, Bolivia, Brazil, Pakistan, Nepal and Finland.  Disabled advocates from 10 nations were in attendance, including the United States—98 people came from Japan alone!

It was agreed by the attendees that a new international organization that focuses on the promotion and advancement of independent living and disability rights for disabled people worldwide was necessary.  “We all voted to create the World Independent Living Network,” Colleen reports, “which will be known as WIN!”

At the top of this conference’s list was the dangerous effort by the current Congress and Trump Administration to gut federal funding for the Medicaid program and repeal the Affordable Care Act.

Colleen and more than 1,500 disability rights advocates from the U.S., joined by advocates from 19 nations, marched over 2 miles from the Grand Hyatt Hotel to the United States Capitol building on July 25th. They chanted all the way, asking Congress for “No Cuts! No Caps! Save our Medicaid.” Colleen further reports that “we also wanted people to know ‘We’re here! We’re loud—Disabled and proud,’ that we want ‘Our homes!  Not nursing homes!’”  A rally on the South Capitol Lawn was attended by close to 2,000 disability advocates shouting to “Save our Medicaid.”

Then there was an ADAPT Action on July 25th www.adapt.org.  More than 300 people with and without disabilities, although most were disabled, assembled in the Lobby of the Hart Senate Office Building in Washington, DC calling for “No Cuts! No Caps!  Save our Medicaid!”  The chanting began promptly at 2 p.m., and got louder as Capitol Police warned people to stop or risk being arrested.  “After the second warning, and when we were given the news that the Senate voted to take up a vote to repeal the ACA,” Colleen says, “the chant changed to ‘I’d rather go to jail than die without Medicaid!’” The Capitol Police began arresting demonstrators, and by the end of the Action 64 people had proudly been arrested.

Colleen took the video and participated in the Action. She praised demonstrators for taking a stand against the U.S. Senate that plans to eliminate Medicaid over time by cutting federal funding, blocking granting the program to states, and setting income caps that would make people ineligible for coverage under Medicaid.

“The Medicaid program is the only program that provides excellent healthcare for low-income people with disabilities in the U.S.,” Colleen asserts.  “Since it was created in 1965, it has also become the best source for disabled people to be able to pay for attendant services that allow them to avoid costly and denigrating institutionalization,” she continues. “Because of what we call ‘home and community based services,’ Medicaid-eligible people with disabilities can hire, train, manage and fire their own attendants, allowing them to live in their own homes or apartments.  This opens the door to employment options for disabled people.”

But when the program limits incomes through income caps, the Medicaid program becomes a work disincentive program.  “We need to reform Medicaid, not cut it,” Colleen explains.  “We should not be thinking of Medicaid as a welfare program anymore.  We should use it as an empowerment program that allows disabled people to have the supports they need so they can go to work.”

Colleen also visited the office of Senator Claire McCaskill, asking her to vote to save Medicaid and help reform it so people with disabilities can go to work.  She also asked McCaskill’s aid to recommend that she support the new Disability Integration Act. This would give people with disabilities the right to live in the community with access to services like attendants, to avoid forced nursing-home placement due to lack of attendant support.

Colleen has repeatedly asked Senator Blunt to also help in this regard, with no positive response or commitment to work toward increased employment opportunities through a revised Medicaid program.

Colleen’s powerful participation at this year’s NCIL continues to make our needs known, make our voices heard and open doors. Thanks, Colleen!