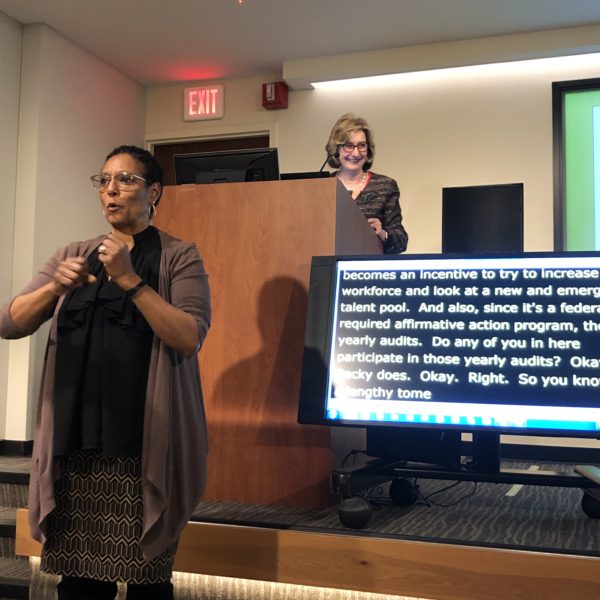 On Valentine’s Day, Colleen Starkloff was “Talking Disability” once again. She was invited to speak to Bayer employees about people-centered language and attitudes when interacting with people with disabilities.

The two-hour seminar was organized by the HOPE and Bayer Family Business Resource Groups.  Over 30 people attended in person, and there were over 100 people joining from a web broadcast that reached Bayer employees worldwide, even as far as Uberlandia, Brazil.

This seminar was the inspiration of Barry Jacobson, who is the father of a child with a disability. Jacobson said, “It’s difficult to talk to others about the accommodations you need at work to take care of a family member with a disability.”

Bayer committed to the vision of inclusion by hosting the event in the most accessible facility on campus, employing two ASL interpreters and offering captioning for participants in the room as well as on the web broadcast.

Colleen was also joined by two Starkloff Disability Institute Board Members, Bill Sheldon and James Frost, who demonstrated video calls and gave advice to employees about how to be welcoming to people who are deaf.

The crowd was a mix of those connected to the disability community directly and some who were just there to learn more. One of those employees was a facilities manager who spoke with Colleen about his ongoing project to make all of Bayer’s campus facilities ADA-compliant.

“I originally came to this to learn more about the ADA, but I gained so much more than I thought,” said the employee after the presentation. “I’m going to keep coming back to this material as I move forward in this massive project.”

Another face in the crowd was Starkloff Career Academy’s own, Bryan Parrish. Bryan is an alumnus of the Starkloff Career Academy Capstone Course. After completing the Capstone Course, Bryan was equipped with the skills he needed to land a job at Bayer as an Onboarding Recruiter. Seeing Bryan in the crowd confirms we are successfully changing societal attitudes and corporate processes surrounding hiring and retaining employees with disabilities.