David Newburger Accepts Full-Time Position as Commissioner on the Disabled for the City of St. Louis 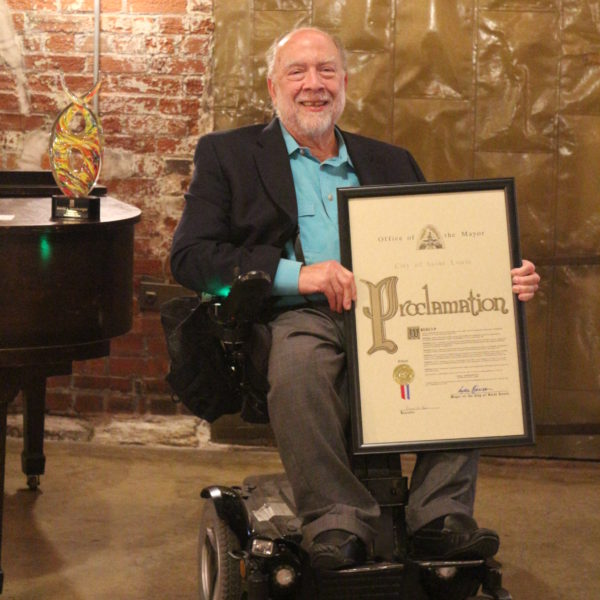 David Newburger has spent decades advocating on behalf of people with disabilities, but he’s never thought of it as a job. Advising employers on disability hiring and retention, educating government officials and community leaders on the finer aspects of the ADA, promoting the concept of universal design and helping architects successfully implement it in their projects—it all amounts to a lot of hard work, but it holds a much more personal meaning for David.

“Our careers in the disability rights field are really not careers, they are missions. That’s how I view this world of equal opportunity and access that I’m involved in,” David says. “In my life, I try to accomplish the mission of helping people with disabilities become full participants in their community.”

Since 1979, David has helped local companies devise and implement strategies for hiring and retaining qualified applicants with disabilities through his private consulting firm, Newburger & Vossmeyer, LLC. He continued his quest for disability inclusion and competitive employment by founding the Starkloff Disability Institute together with Max and Colleen Starkloff in 2003. In 2008, the City of St. Louis appointed David to be the Commissioner on the Disabled, a part-time role he juggled along with his consulting services and responsibilities at SDI.

The focus of his mission shifted slightly this summer when David accepted the position of full-time Commissioner on the Disabled, or ADA Coordinator as it’s sometimes known, for the City of St. Louis. In July, after months of careful consideration, he made the difficult decision to set aside his consulting practice and ADA policy work at SDI, a move that he says makes it easier to see important government initiatives through to the end.

“It was difficult to effectively follow up when I was going back and forth between different jobs all the time,” David explains. “I think this puts me in a better position to meet the goals and outcomes of this office.”

According to David, the city recently allocated $1.5 million for a review of potential barriers to full participation for residents with disabilities. It is his hope that, through responsible stewardship of these funds, quality of life will continue to improve for St. Louisans with disabilities.

“I have an opportunity to dig in heavily and make sure this money is spent productively, so we have a real chance to eliminate many of these barriers to equal access,” David says.

In David’s estimation, St. Louis ranks toward the middle of the pack in terms of disability-friendly cities. It is far more proactive than places like Los Angeles and New York, municipal governments that only prioritized disability after being threatened with litigation.

Simply by having a full-time Commissioner on the Disabled, St. Louis is significantly ahead of the curve. Any city with more than 50 employees is required to appoint an ADA coordinator, but it’s often a part-time position filled by someone with little to no knowledge of ADA-related matters. David recalls a running joke about city employees returning from vacation only to discover they’ve been assigned the role of ADA coordinator, a promotion they weren’t necessarily looking for.

“Over the years, more and more of our leaders have come to pay greater attention to the ADA, just by my meeting with them, explaining the laws and answering their questions,” David says.

While his government duties will occupy most of his time, David will continue to serve on the SDI Board of Directors. He is pleased with the overall trajectory of the organization he helped establish.

“It has moved in a direction that is more oriented toward direct service, which I think is very good,” David reflects. “The programs and services we’re beginning to offer at SDI are quite fantastic, one-of-a-kind, really.”

On the evening of September 19, past and current SDI staff, board members and many of David’s closest friends gathered at SqWires Annex in Lafayette Square for a special dinner in celebration of his immeasurable contributions to the organization. David was presented with a commemorative glass award as well as a proclamation from Mayor Lyda Krewson, who also stopped by to honor David with a toast.