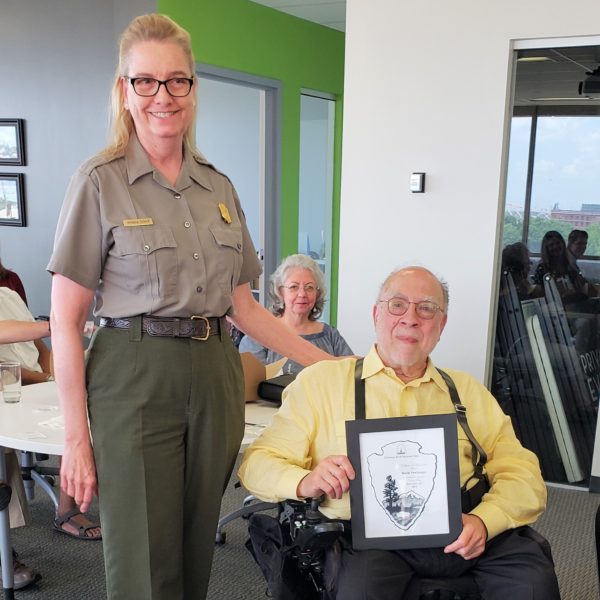 SDI’s own David Newburger took the initiative to ensure that all visitors would be able to enjoy and engage in the new, expanded museum under the St. Louis Gateway Arch. Especially those living with disabilities.

In 2009, David organized a Universal Design Group (UDG) to meet with the various designers who were tasked with creating the building and exhibits. The UDG was also challenged with the infrastructure changes that needed to occur to connect the Jefferson National Expansion Memorial buildings together. This project connected the Old Court House with the Gateway Arch Museum in a seamless way.  Visitors can now move effortlessly from the Old Court House at the western edge of this new site, through a newly designed Luther Ely Smith park to reach the new museum.

Every detail of the visitor experience was examined by the UDG. The group included people from all parts of the Disability Community: people who have mobility disabilities, people who are blind/low vision, deaf people, those with cognitive disabilities, etc. All were represented in the UDG.

The diversity within the UDG shines through in the various types of sensory elements throughout the museum’s exhibits, including tactile replicas of large exhibits, Braille descriptors and open captioning.  The extent of the interactive elements is impressive to more than just the disability community.

“I don’t have any people with disabilities in my family, but my children were thrilled with the tactile elements in the museum,” said Eric Moraczewski, Executive Director of Gateway Arch Park Foundation. “The experience you’ve given to not only those with disabilities, but to my children makes me extremely grateful.”

On June 18, the National Park Service honored David for his leadership on the design process. Thanks to David’s exceptional direction, the importance of universal design throughout the museum was given a voice. Now, all visitors can have the same, engaging experience at the same time. The UDG’s work has been such a success that the National Parks Service has now adopted an “All In” campaign to guide further development of parks to include UDG on all future projects.

David’s constant vigilance in gathering the UDG to meet with all designers of the building, landscape and exhibit design paid off.  The entrance, exhibits, restrooms and view of St. Louis from the top of the Arch have all been carefully tailored.

We are proud of David and greatly appreciate his efforts to make the museum enjoyable for all.

The new Museum opens on July 3 at 10:00 a.m.  Make a visit to enjoy the benefits of Universal Design for yourself!