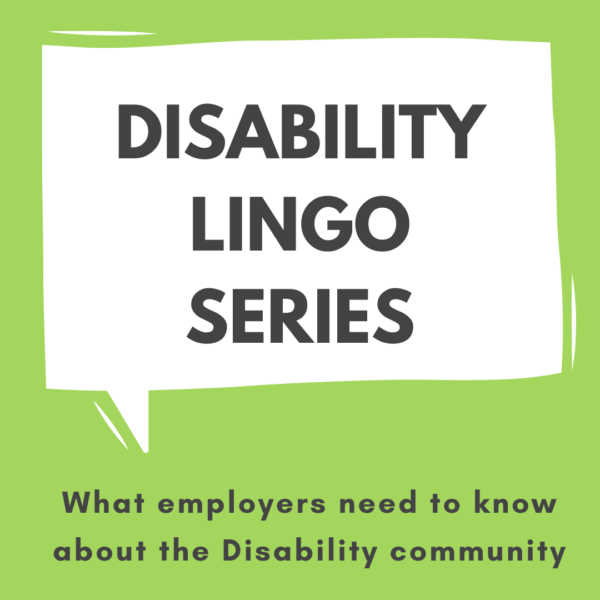 In this series, we discover some common words and phrases used by the disability community that employers benefit from knowing.

Vocational rehabilitation (VR) provides people with disabilities services for finding and maintaining employment. These might include assistance with getting a degree or certification, assistance with finding work and/or assistance with purchasing assistive technology.

Assistive technology is a broad term that encompasses any kind of device or software that helps a person with a disability perform daily activities. Examples include voice-activated software like Dragon Naturally Speaking, screen magnification software like ZoomText, screen reading software like JAWS and physical devices like CC-TVs.

A job developer is specially trained to help people with disabilities find jobs. The responsibilities of a job developer include helping a person learn job-search and resume-writing skills, networking with employers to generate job leads, and ensuring newly-employed individuals have everything they need to be successful.

In the language of disability employment services, supported employment means providing additional services to someone with a disability after they’ve successfully gained employment. These professionals might be called job coaches or retention specialists. Their responsibilities include ensuring the person with a disability learns their tasks and is able to navigate the workplace both physically and socially. In addition, job coaches and retention specialists work closely with the employer to ensure any problems that may arise are met in the most effective way possible for everyone involved.

This is not to say that sheltered employment doesn’t have its purpose. Plenty of new job seekers have gained valuable skills in a sheltered environment that they have been able to turn into jobs in the competitive market.

Use Person-First Language – People are more than just their disabilities. Say “person with a disability.” Don’t say crippled, handicapped, or invalid. Conversely, a person without a disability shouldn’t be referred to as “normal.” Saying someone is normal implies having a disability is abnormal or strange. Use “able-bodied” instead.

Recognize Disability is a Social Identity – A key aspect of the Disability Rights Movement is that disabilities and Deafness are not just medical conditions. They are social identities with their unique cultures and values. You wouldn’t say someone is “a victim of,” “afflicted with,” or “suffering from” their race or gender identity, so don’t say it about a disability. Say “person who has …,” “person with …” or “Deaf” instead.

Recognize the Right to Choose – Saying someone is “confined to a wheelchair” implies the person has no choice and reinforces the idea that the person is a victim. Saying the person “uses a wheelchair” emphasizes their ability to choose what they do about their disability.

This also means you can’t just start touching someone or their things without their permission. Adaptive equipment like wheelchairs and canes as well as service animals should be regarded as a part of the person’s body. Don’t touch such without permission, and if the person says no, don’t get offended.

Call it What it Is – There’s no reason to refer to a disability as anything other than what it is. One in four people has a disability, making it an extremely common aspect of life.

Some people would argue that a disability diagnosis leads to stigmatization. Our counter-argument is that using euphemisms or dancing around the diagnosis just serves to reinforce the idea that a disability is something to be ashamed of. The more people own their disabilities, the less stigmatizing disability becomes.

There is a debate within the disability community about the pros and cons of the word “special.” For employers, the best practice is to continue using the word “disability.”

Know What Certain Words Mean – Words like “lame,” “dumb,” “crazy,” or the r-word were once used to describe people with disabilities. “Handicapped” used to refer to people in wheelchairs begging for change on the street, their caps in their hands to collect coins. “Cripple” comes from the Old English word for “to creep” meaning to crawl along the ground.

Anxiety disorders include Generalized Anxiety, Post-Traumatic Stress and Obsessive-Compulsive disorders. These disabilities are characterized by intense, unmanageable anxiety and may include panic attacks.

Panic attacks are not just periods of heightened anxiety. They are so intense that people frequently mistake them for heart attacks or strokes. People may feel as if they are dying, and many end up going to the emergency room.

It’s also important to note that claiming to have Obsessive-Compulsive disorder, or “OCD” because you like things done a certain way is offensive. People living with OCD feel compelled to perform the same routines over and over again as a means of controlling their anxiety. Classic examples include obsessive hand-washing, but can also include hoarding and other potentially dangerous behaviors.

This is group of mental health conditions that includes Schizophrenia and is characterized by symptoms such as hallucinations, delusions and disorganized thinking, as well as “negative symptoms.” Negative symptoms are thoughts, feelings, or behaviors normally present that are absent or diminished in a person with a mental disorder — including not moving, or appearing flat and emotionless. This is called the “flat affect.” People with negative symptoms don’t lack emotions though. They are just unable to project them outwardly.

Despite often being portrayed in the media as dangerous, people with psychotic disabilities are far more likely to be victims of abuse and violence than the perpetrators.

This group of mental health conditions results from the use of addictive substances, but can also include addictive behaviors like compulsive gambling. Substance abuse disorders are diagnosed when the use of a substance begins to interfere significantly with a person’s life. Substance dependency is diagnosed when a person becomes physiologically dependent on a substance. Not regularly using the substance puts these people in withdrawal.

Withdrawal symptoms can be intense. They can include mood swings and anxiety and also be physically painful. One of the hardest substances to withdraw from is nicotine. People who want to quit smoking may try 10 or more times before they are successful. One of the most dangerous substances to withdraw from is alcohol, as people withdrawing from alcohol can experience seizures.

Even when a person is successfully off a substance for a substantial amount of time, the body’s desire for it remains. You should respect peoples right not to engage in behaviors they don’t want to.

And yes, caffeine dependency is a real thing.

You can learn all about mental health conditions from the National Alliance on Mental Illness by visiting their website, www.nami.org.

ASD is the Diagnostics and Statistics Manual, 5th Edition (DSM-V)’s classification for those presenting behaviors associated with autism. By placing autism on a spectrum, the authors of the DSM-V hope to reflect the wide range of abilities and experiences those living with autism possess.

Under the previous edition of the DSM, those with very high-functioning autism received this separate diagnosis. Some people still prefer this diagnosis over Autism Spectrum Disorder and may call themselves “Aspies.” But it is considered rude to refer to someone as an “aspie” without their permission, especially if you don’t have autism.

The neurodiversity movement argues that differences in the ways brains function are normal rather than defective. Those with autism are neurodiverse. Neurodiverse people have learning, processing, behavioral and cognitive disabilities. People without these are considered “neurotypical.”

The mind of a neurotypical person unconsciously filters out incoming sights, sounds and other sensory input that isn’t needed. Many people with autism don’t have this ability, so things like loud noises or too many visual stimuli can lead to exhaustion or distress. Because of this, many people with autism try to avoid overstimulating environments. You can help someone who is overstimulated by assisting them to a quite space away from the main activity where they can recover.

You can learn more about autism from the Autism Society of America by visiting their website, www.autism-society.org/.