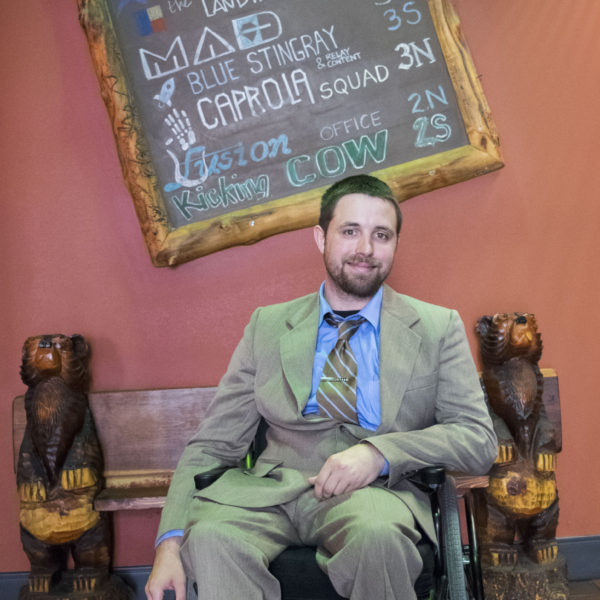 The Starkloff Disability Institute stands with ODEP and celebrates NDEAM every year to promote disability employment.  This year, we celebrate with success stories of our Starkloff Career Academy candidates—people with disabilities who have worked very hard to find and land the perfect job!

“I’ve always seen my disability as a strength. Through the Starkloff Career Academy, I learned how to talk about it in an interview. Hearing others with disabilities was reassuring and definitely helped me build confidence in myself.”

Bryan Parrish is a person who doesn’t give up. Bryan began his employment journey at 16 in a St. Louis movie theater where he was employed for 10 years. He received his bachelor’s degree in Business Administration from Sanford-Brown College and his master’s degree in Human Resources Management from Webster University.

Bryan was born prematurely with Cerebral Palsy – a neurological disorder that affects movement, motor skills, and muscle tone.  He learned from his mother at an early age to not let his disability define him and was expected to make his way in life, just like his three brothers.  He was persistent in finding the right job, but attended the Starkloff Career Academy (SCA) during his master’s program to strengthen his confidence in interviewing, resume writing and networking to become a competitive job seeker.

Unfortunately, despite his formal education and training at Starkloff Career Academy, it was hard to find a professional job that fit his qualifications.  The first job he took was an unpaid internship.

“I looked for an internship before I left school, so I could have a better chance of employment,” Bryan says. “My search wasn’t very successful, so I took the internship – even though it was unpaid.”

Through SCA, Bryan was able to network with some of the top employers in St. Louis. Bryan now works for Bayer (formerly Monsanto) as an Onboarding Recruiter, and he handles pre-employment background checks and drug screenings. Lynn Frazier, Pre-Employment Compliance Supervisor, thinks Bryan is the right person for their team.

Lynn recalls his interview fondly, “Bryan didn’t have the ‘exact’ experience we were looking for, but his awesome attitude really showed and we saw his potential. He was super eager to come work for us.”

Employing Bryan has also brought forth an unexpected wealth to his recruitment team.

“If we have a question or concern about how to accommodate him, he never makes us feel awkward. We learn things from him on a regular basis that make us better as a team,” Lynn says.

Bryan believes that living with a disability makes you stronger, persistent and able to take adversity in stride. Bryan’s dream job is to be the head of an HR department, and Starkloff Disability Institute is confident he will achieve his dream.