Fall Class of 2018 gets creative with COCAbiz 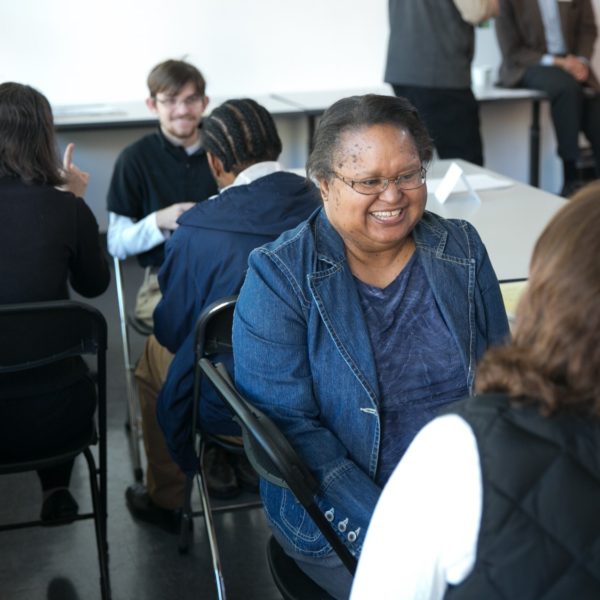 The Starkloff Career Academy Fall Class of 2018 stretched their creative muscles with help of the Center of Creative Arts’ unique take on business training: COCAbiz.

On October 16th and 18th, the class travelled to COCA, near the Delmar Loop in University City to learn from creative arts professionals about how to engage others with well-crafted personal stories and strong body language.

“I learned a lot about myself today, more than I thought I would,” candidate Barbara Labinjo said. Candidate Janet Welter agreed: “I’ve never done anything like this before I’m so glad I was referred to this class.”

The duo of COCAbiz instructors, Susan Grigsby and Ed Reggi, represents some of the most experienced creative professionals in the St. Louis area.

Susan Grigsby, who taught the October 16th class, is a freelance writer and teacher. Her first picture book, In the Garden with Dr. Carver, was selected in 2011 as one of The Best Children’s Books of the Year by The Bank Street Children’s Book Committee, and was named a 2011 Notable Social Studies Trade Book for Young People by the National Council for the Social Studies. Her poetry has been published in national literary journals. She received her BA from Bard College in New York and her MBA from Webster University. She more recently completed a Master of Arts in Teaching with a focus on the integration of creative writing across the curriculum.

Ed Reggi taught the October 18th class. Ed trained at Chicago’s historic Second City and studied Victoria Spolin’s seminal Theater Games, eventually touring internationally to teach them. Reggi is an Emmy Award-winning actor and director. He founded the Improv Festival, The Fringe Festival, the 48-Hour Film Challenge and served as Director of Theatre and Voice at COCA. Since 2009, Reggi has lectured on the topics of open source digital storytelling, social media driven strategies for nonprofit organizations, 21st century new media literacy, and the influence of digital storytelling on the future of public media. Reggi received the 2013 Human Rights Campaign (HRC) Equality Award for his outstanding advocacy and service to achieve Marriage Equality in Missouri.

“It was a privilege for COCAbiz to partner with the Starkloff Career Academy,” COCAbiz Director Steve Knight said. “Our Teaching Artists were incredibly excited to offer the same learning experiences that we provide to corporate leaders at large organizations. The Starkloff planning team were wonderful partners, helping us find ways to make our experiential learning method accessible to all participants,” he continued. “We learned a lot and were inspired by the willingness of participants to push boundaries to find more powerful ways of telling their stories. The whole COCAbiz team looks forward to continuing to work with The Starkloff Career Academy!”

The Starkloff Career Academy Staff and the Fall Class of0 2018 want to thank Steve Knight, Susan Grigsby, Ed Reggi and all of the wonderful staff at COCA.