FestAbility 2019: A Universal Celebration of Disability 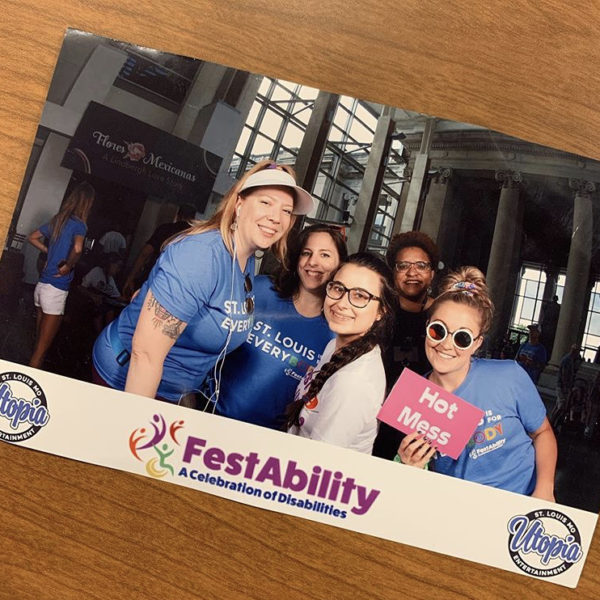 Uniting people of all ages, abilities and walks of life, FestAbility has quickly emerged as the premiere celebration of disability pride in St. Louis.

For the second consecutive year, FestAbility has attracted better than 3,000 attendees, packing the history museum grounds and sending the emphatic message that St. Louis is for everyone, regardless of their ability.

As one of its founding member organizations, the Starkloff Disability Institute is thrilled to be part of FestAbility’s incredible momentum. Sarah Schwegel, Youth Transition Coordinator at SDI, says the event holds special significance beyond the exciting festivities.

“FestAbility was so much fun. I’m glad SDI had a chance to be part of the event for the second time,” Sarah says. “It is an empowering day for all people with disabilities.”

Much like it did last year, FestAbility 2019, presented by Emerson Electric, featured an eclectic menu of entertainment and activities for people of all ages and abilities. DSAGSL Rocks and the TAGG Stars kicked things off on the main stage with spirited musical numbers and dance routines. Louie, the furry mascot of the Stanley Cup Champion St. Louis Blues, delighted festival goers with a surprise appearance as well.

The music continued with the unique vocal stylings of CHARIS, and the outdoor festivities culminated with an all-inclusive dance party led by Utopia Entertainment.

Jenna Baker, one of FestAbility’s organizers, remembers being amazed by the boundless enthusiasm of the FestAbility performers. “They definitely stepped up to the plate and provided that high-energy entertainment to keep people excited and engaged throughout the entire event,” she says.

A variety of indoor activities offered relief from the summer heat, including adaptive music, dancing and yoga. The FestAbility Kid Zone! powered by Moneta, allowed young people to express themselves through various STEAM exercises and art projects courtesy of RoboRebels and Artists First, respectively.

The therapeutic canines of Duo Dogs kept everyone smiling throughout the day. When guests needed a momentary break from the excitement, they could relax and unwind in a sensory room provided by Lasting Impressions, the accessible home remodeling specialists.

Nearly 40 volunteers worked tirelessly throughout the day to ensure everyone’s safety and enjoyment. As she did last year, our own Katie Fields coordinated the volunteer effort. “From assisting with the food trucks and helping out in the kid zone, to making sure we had a crossing guard and accessible parking, we really had all hands on deck for every aspect of the festival,” she says.

According to Katie, ensuring all guests are able to share equally in the day’s activities is a challenge FestAbility volunteers embrace. “Accessibility doesn’t mean that things aren’t going to be fun. Accessibility is necessary for some but beneficial to all, and I think FestAbility is a testament to that.”

FestAbility 2019 coincides with the 29th anniversary of the Americans with Disabilities Act becoming law. As a powerful symbol of this victory for disability rights, event organizers unveiled a giant banner emblazoned with official language from the landmark legislation.

Meg Geiger, a former Starkloff employee who has spent much of her professional and personal life advocating for equality, says it was a stirring tribute:

“I teared up a couple of times. It was really touching to watch everyone as they went up and signed the banner, as if they were signing it into law,” Meg recalls. “It was probably my favorite thing about FestAbility this year.”

With the 30-year anniversary of the ADA on the horizon in 2020, we can expect even bigger things from FestAbility in the coming year. Katie looks forward to shining an even brighter spotlight on the ADA in 2020.

“I think the ADA anniversary should be celebrated more than it is,” Katie professes. “Other than an occasional article, we don’t hear enough about it. That’s why it’s really exciting to have this celebration for people to take pride in how far we’ve come and have appreciation for how far we still need to go.”