FestAbility: A Celebration of Disabilities – The beginning of a strong tradition for St. Louis 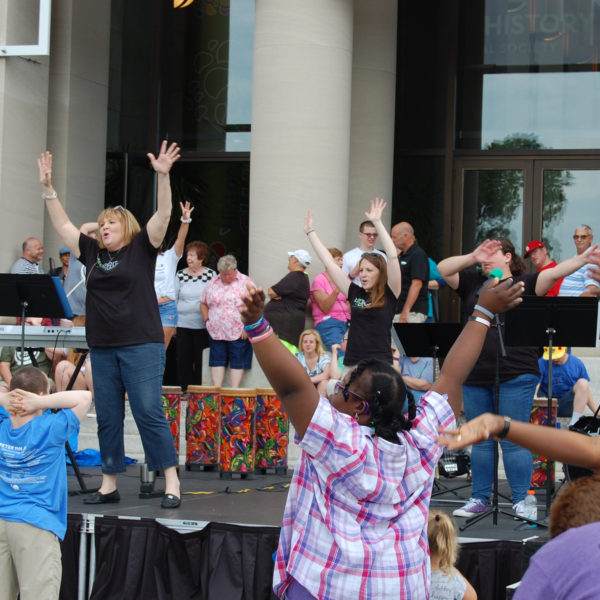 The first-ever FestAbility: A Celebration of Disabilities debuted on July 28, 2018 at the Missouri History Museum in Forest Park! Families and people with disabilities were seen coming together to celebrate the 28th anniversary of the Americans with Disabilities Act. The festivities were kicked off in high gear with a dance and cheer routine from the Totally Awesome Girlfriends Group (TAGG) and the energy stayed high all the way until the end of the night at 9 p.m., with a total attendance of around 3,000.

FestAbility entertainment also included performances on the main stage from DSAGSL Rocks, a duo of rock bands comprised of individuals with Down Syndrome.  The Emcees for the day included Christina Coleman (KSDK-5 on Your Side,) Billy Greenwood (Billy and Julie in the Morning on KLOU,) Blake Whiteside (93.7 The Bull) and Derek Baker, a member of DSAGSL Rocks.  The DisAbility Project, an inclusive theater group featuring performers with and without disabilities, performed two musicals.  Different Dynamics provided a fun and interactive performance that had kids and adults on their feet and dancing along. Utopia Entertainment finished the evening with dancing and featured a DJ Battle along with Starkloff Career Academy graduate JJ Howard. All mainstage performances were also live-captioned and featured sign language interpreters.

Inside the Missouri History Museum, families visited tables of vendors including many of the non-profits involved with the planning of the day’s event. Downstairs, the Duo Dogs touch therapy dogs were a highlight for many attendees. Next door to them, the FestAbility Kids’ Zone host activities for families including RoboRebels’ #STEMforALL with robot racing and building, and Artists First brought notepads and items to decorate them.  Natasha Baebler, a yoga instructor who is blind and the founder of UD for Yoga led a class including volunteers from Yoga Buzz.  They interpreted the yoga poses for individuals in chairs.  Thirty-six volunteers helped with set-up and accessibility throughout the day!

Guests at FestAbility enjoyed food all day from Essentially Fries, Guerrilla Street Food, and Destination Desserts. Frozen treats from Kona Ice and ice-cold draft beer courtesy of Beer Outside were provided. The Saint Louis Earth Day volunteers were also on hand to make sure all waste was properly sorted and the grounds of the museum were kept tidy.

The Museum staff also hosted sensory activities in their upper galleries and accessible guided tours for the deaf and blind. A sensory break room was provided inside for families, which was sponsored by Lasting Impressions.

The festival was hosted by a committee of representatives from Starkloff Disability Institute, Paraquad, Variety, Special Olympics Missouri, Mind’s Eye, Down Syndrome Association, Muscular Dystrophy Association, the St. Louis Arc and the Center for Head Injury Services.  We would all like to thank our Presenting Sponsor Emerson, as well as our Silver Sponsor Microsoft. We extend our thanks to our Bronze Sponsors: United Access, Lighthouse for the Blind and Synergy Wealth Solutions. FestAbility was also supported by iHeart Radio.

Follow this link to view photos from the event!