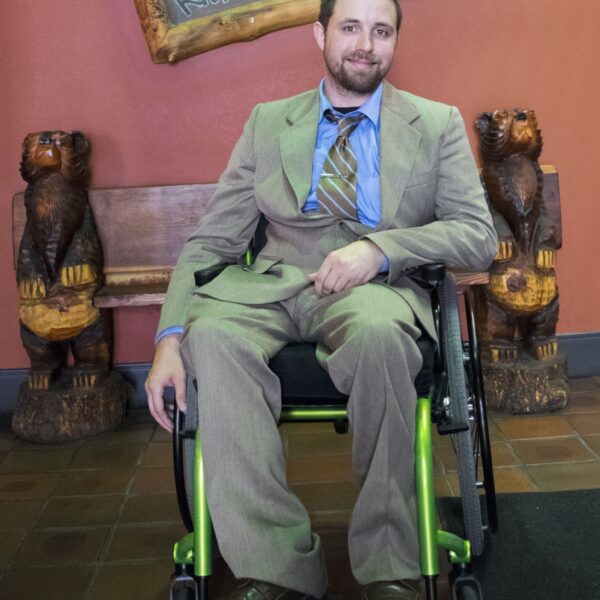 In the spring of 2017, Bryan Parrish successfully completed the Starkloff Career Academy course, eager to advance his professional journey in the realm of human resources.

Four years later, Bryan has climbed the talent acquisition ranks at Bayer to become a recruiter. He’s also the newest addition to the SDI board, an honor he doesn’t take lightly.

“I may be doing this in my spare time outside of work, but I’m more passionate about this than anything I’m actually doing for a paycheck,” Bryan declares. “I’ve always wanted to be in a position where I can give back to the community, and not just any community, but the one I feel like I directly relate to.”

During his undergraduate studies in business administration at Sanford-Brown College, Bryan explored every level of the corporate structure. Friendly and outgoing by nature, he gravitated toward marketing and ultimately HR, departments that thrive on personal interaction.

“To me, these are the two main aspects of business: numbers and people. I’m not really a numbers guy. I’m okay at math, but it’s not something I would want to do all day for a living,” Bryan explains. “I’m more of a people person. Marketing involves some of that direct interaction, but HR is all about people.”

After earning a Master’s in Human Resources Management from Webster University, Bryan landed a recruiting assistant position at Bayer, handling the series of tasks that make up the preemployment phase. His responsibilities included conducting drug screens, physicals and background checks, ensuring each candidate was cleared to work from a compliance standpoint.

“I established really good relationships with my existing team, and they were able to offer me a recruiting position,” Bryan recalls. “There were seven people altogether doing preemployment stuff in St. Louis, and I was the only one to be offered a position. I like to think that it’s because my work spoke for itself, but I’m still very fortunate.”

Now Bryan spends his days reviewing resumes, conducting phone interviews, and making arrangements for the second-round interviews that take place on site. As a person with cerebral palsy, he is also committed to building an inclusive culture at Bayer.

“We’re still in the infancy stages, but we’ve recently taken on some diversity goals,” Bryan reports. “I’m obviously passionate about it, so I’m hoping I can personally tackle it from a disability perspective in whatever way I can.”

As one of the Career Academy’s most active alumni, Bryan never hesitates to give a speech, attend an SDI event or sit down for an interview — anything he can do to promote SDI’s mission. But as a new board member, he’s eager to help strengthen the organization internally as well.

“I’m very excited to actually be on the operational side of things and gain that executive-level experience in the nonprofit world,” Bryan explains.

Bryan’s generosity and enthusiasm for volunteering is boundless as well. He has coordinated events for the March of Dimes Bikers for Babies and spearheaded numerous private fundraising campaigns, experience he expects to apply and build upon in his role on the SDI board.

While he looks forward to contributing right away, Bryan recognizes that there is also a kind of orientation period that must take place.

“Any time you join a team, you want to get in there and learn the process, learn how things are done,” Bryan concludes. “Then, you can start giving your own input. The best way to create positive change is to be the new blood in there and offer a new, fresh perspective.”