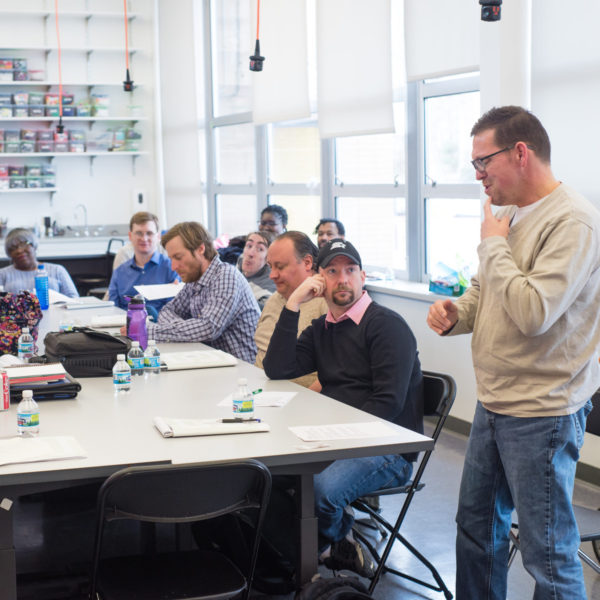 Starkloff Career Academy regularly partners with the Center of Creative Arts to teach job seekers networking and interviewing skills. We have learned from them that the most effective job seekers are also good story tellers.  Here are four COCA-inspired ways tell more engaging stories to potential employers:

Compelling stories have a simple, easy-to-remember structure — setup, problem and resolution. But job seekers often struggle with how much detail they should include. Good stories convey just enough detail to paint a full picture of the situation without losing the audience’s interest.

Start by giving the story context. Briefly explain where you were working, when and what your job title was. Next, describe the problem you faced by answering these four questions.

The answer to these four questions can be a single sentence. For example, “I was working as a lab technician in 2015. It was a Friday at 3pm, we got a giant batch of blood samples to process by the end of the day, and I was the only technician still at work!”

After laying out the problem, you can answer these questions to show how you solved it.

Specific results are especially important. Rather than just saying, “My supervisor was happy,” say, “My supervisor let me know that the hospital called him to tell him how grateful they were that we completed the task on time, and he told me that was entirely because of my hard work.”

Other details can be added based on the kind of story you’re telling. If your story is about working on a team, how many people were you working with and what were their roles? If you had to communicate with another person, don’t just say, “I talked to Jim.” Describe what you said and how you said it. This gives the listener insight into your communication style.  For example, “When I spoke to my supervisor, I said, ‘I’m not confident that I can complete all of this by 5 p.m. Is it a problem if I’m unable to process every sample?’”

Metaphors are useful for making your story more engaging. “We had a lot of customers that day,” doesn’t sound nearly as stressful as, “Customers were coming in like a flood.” An image like this causes an emotional reaction in your audience.

Metaphors are also useful for conveying information to your audience in a way they will understand. A front-end web developer might describe a website as a building and say, “My role is to make the building look attractive so people will want to come inside,” while a back-in developer might say, “I make sure the lights come on and toilets flush.”

Exercise some caution when picking what metaphors you use. It isn’t safe to describe your former boss as “a bear.” Likewise, saying something like, “Working for that company was like herding cats” sounds disparaging to the company. As a rule of thumb, reserve metaphors for describing people or companies in positive ways. For example, “My last boss was like a patient teacher.”

Put Some Feeling into It

As mentioned above, stories are more memorable if they make an emotional connection with the audience. Try to incorporate a bit of emotion into the story you tell. For example, “I was frustrated at how big a task I had to complete in such a short amount of time, but when I finally finished, I felt elated!”

If your story is about doing something routine, emotions help spice things up. For example, “I felt confident because this was a routine project and when it was over, I felt my usual satisfaction for a job well done.”

Write your stories down. Tell them to friends and family and ask where you need more detail and where you need less. Find places where metaphors can be used to quickly convey ideas.  Space this process out over a few days so you can approach your stories with fresh eyes. The goal is to get your story down to a few key bullet points. This way, you can easily remember them when networking or interviewing.

By incorporating metaphor, emotion, finding the right balance of detail and practicing, you’ll make your stories more engaging and leave a lasting impression on your listeners.