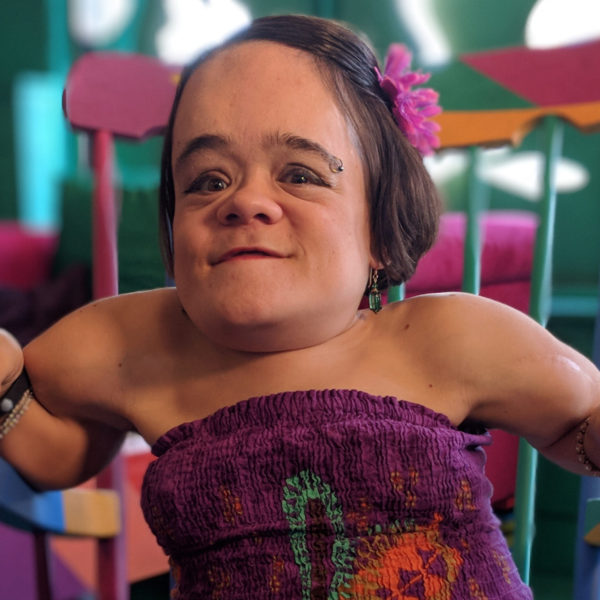 Gaelynn Lea wasn’t planning to enter National Public Radio’s Tiny Desk Contest. In fact, she’d never even heard of it. But when 3 different people in the span of a week – 2 of her fiddle students and a dear friend from college – each asked if she would compete in NPR’s annual showcase for independent musicians, Gaelynn figured she should at least look into it.

A less than pleasant experience trying out for America’s Got Talent years before left her reluctant to jump into another competitive, if not contrived, musical exhibition, but it soon became clear to Gaelynn that NPR offered a better opportunity.

“With America’s Got Talent, you sign a contract that basically says they can make you look however they want, and you don’t have any legal rights whatsoever. It’s kind of the grossest contract in the world, which I signed, but luckily I didn’t make it on the show,” Gaelynn recalls. “So I was a little skeptical of the contest at first, but I read all the Tiny Desk Contest rules and it seemed like they weren’t just trying to make money off you. They’re just giving you this great exposure to the NPR audience, and the prize is this amazing tour.”

So that same college friend shot a video of Gaelynn performing one evening before the pair headed out for half-price wine night. The video, which NPR music judges would ultimately select from more than 6,000 entries as the winner of the 2016 Tiny Desk Contest, featured Gaelynn on violin and vocals for an enchanting rendition of her original composition, “Some Day We’ll Linger in the Sun.”

For an independent artist who has always had a day job and never performed outside her home state of Minnesota, the contest victory prompted a sudden thrust into the national spotlight — a whirlwind experience replete with media coverage, podcast appearances, speaking engagements and performances at some of the world’s most iconic venues for live music.

It inspired Gaelynn and her husband Paul to commit fully to a life of touring and performing. While the experience of an independent musician on the road doesn’t include the air travel and fancy hotels of the NPR tour, Gaelynn’s gotten to meet and play with groups like Wilco and the Decemberists, artists she grew up adoring.

Even now, the lifechanging significance of winning the Tiny Desk Contest isn’t lost on her.

“I don’t know how, but this is definitely the beginning of a completely different chapter,” Gaelynn remembers thinking to herself.

But the early chapters were just as formative for Gaelynn. Influenced by a musically inclined family, she performed in a total of 13 plays and musical theatre productions growing up in Duluth, Minnesota. She participated in ballet and gymnastics as well.

Gaelynn did all of these things despite being born with osteogenesis imperfecta (a rare genetic condition commonly known as brittle bone disease). For people with OI, insufficient collagen levels interfere with healthy bone development, causing symptoms like frequent fractures, joint deformities, short stature and curvature of the spine.

When Gaelynn expressed interest in ballet as a preschooler, a classroom aid introduced her to an instructor who embraced the idea of starting a program for students with disabilities. Gaelynn was a devoted ballerina for roughly a decade, initially performing dance numbers on the floor and later from her wheelchair.

An adaptive gymnastics class would later develop in a similar fashion, again with Gaelynn’s vivacious spirit leading the way. For her, these experiences served as a kind of childhood introduction to disability advocacy.

Although she enjoyed all of her various activities and artistic pursuits, fourth-grade Gaelynn discovered her true passion while sitting in the audience for a middle-school orchestra concert.

“I just remember being mesmerized by the sound of the strings and the unity of the bows going in the same direction at the same time,” Gaelynn fondly recalls. “It was just really pretty, and I knew I wanted to do that next year.”

There would be some hurdles, however. Gaelynn demonstrated a natural ear by acing a music-listening test, the only member of her class to do so. The violin was beckoning, but her physical disability would prevent her from adopting the traditional posture and bowing technique. Fortunately, Gaelynn’s fifth-grade orchestra teacher was just as determined to find a solution.

Over several months of trial and error, Gaelynn and her teacher developed a playing method where the violin sits upright on the floor in front of Gaelynn’s wheelchair, reminiscent of a cello, and tethered to her toes for stability. Roughly half the length of a standard violin bow and modeled after that of a bass, Gaelynn’s custom bow allows her to maintain a more comfortable grip.

Gaelynn used this modified style to excel at violin throughout middle and high school. She eventually earned a coveted spot on the elite orchestra as a senior, despite missing the first 6 weeks of school recovering from an intense spinal fusion surgery. That initial teacher who was so resourceful in the beginning has since retired, but she’s never far from Gaelynn’s heart.

“I’ve seen her at a few of my concerts and she’s over the moon because neither of us thought I’d be doing this as a career,” Gaelynn remarks. “She was very honest with me at the time. She said, ‘I don’t know if I’ll be able to figure this out, but let’s try and experiment.’ And we’re both so glad she did.”

The adaptation of Gaelynn’s instrument didn’t end in middle school, though. In 2011 she met Alan Sparhawk, the Duluth indie rock artist who introduced her to the looping pedal she now uses to harmonize with herself during solo performances.

Of course, not everyone is so open-minded. Gaelynn has encountered instructors of all kinds during her musical journey: some solution-oriented and creative, others skeptical and resistant. She’s reached the conclusion that it should be solely up to the student to determine what is possible.

Before she knew music could be a viable profession, Gaelynn’s career plans looked a little different. Childhood aspirations of becoming a veterinarian or ballerina eventually gave way to more serious occupational goals involving politics and law.

“I started out as a Psychology major at Macalester College in St. Paul, but switched to Political Science. After my first political science class at the end of my sophomore year, I had fallen in love with it, not so much national politics but local,” Gaelynn explains. “I have a lot of respect for what you can accomplish when you’re politically engaged in your local community.”

But medical issues temporarily derailed Gaelynn’s education during her junior year when sudden respiratory failure landed her in the intensive care unit. She eventually recovered, but lingering anxiety and post-traumatic stress made it difficult to resume classes at Macalester.

She went home to Duluth to receive counseling and be near her family. The old Gaelynn gradually returned as she played in bands and reconnected with friends. But she would not return to St. Paul, electing instead to finish her degree at the University of Minnesota Duluth in 2008.

As people with disabilities often do, Gaelynn encountered discrimination and egregious insensitivity as a job seeker. In interviews, she heard comments like, “Now that I see you, I don’t think you can do the job,” and “I don’t know … I think she’ll scare the kids.” She enjoyed the secretarial position she eventually found with the Boys and Girls Club, but she could only live on $8.50 an hour for so long. She tried selling insurance for a time, and although she liked the autonomy of the work, it wasn’t the most natural fit.

Working at a Center for Independent Living did seem to make sense, until they fired her, astonishingly, for requesting an accommodation because of her anxiety and PTSD flaring back up when she was hit by a car in 2011. She asked CIL for a flexed schedule that would allow her to resume therapy sessions. They obliged at first, but later reduced her hours and ultimately parted ways.

These indignities drove her back into the nourishing embrace of music, this time as her livelihood. She began teaching private fiddle lessons, first out of her home and later from an office she rented. She continued as a full-time instructor until winning the Tiny Desk Contest in 2016.

Gaelynn was delighted to be self-employed, particularly in the music realm, but it didn’t feel like much of a choice at the time.

“When I started working for myself I was way happier and made way more money, but sometimes I wonder if it’s because I was destined to be an entrepreneur or just that the system is kind of rigged against disabled people,” Gaelynn acknowledges. “It’s like people with disabilities are somehow expected to foresee instances of ableism and automatically have an answer for it.”

As a touring musician on the independent music circuit, Gaelynn is confronted with a shocking lack of access. She is forced to get ready in bathroom stalls and mop closets because green rooms are almost always positioned at the top or bottom of a flight of stairs. Stages frequently lack wheelchair ramps, even when they are requested well in advance. No longer willing to accept the humiliation of being unceremoniously hoisted on stage for her sets, Gaelynn decided to take a stand.

“I stopped playing on stages without ramps,” Gaelynn declares. “If they’re not able to provide a ramp, then I’ll just play on the floor in front of the stage. It sends a silent message to the audience that this venue isn’t equally welcoming to everyone.”

Gaelynn plans to discuss disability employment, equal access and other aspects of disability culture in her forthcoming book, a project she hopes to tackle in between YouTube concerts and public speaking engagements on Zoom. Instrumental in getting a mandatory mask mandate passed in Duluth, she’s remained civically engaged as well. She sees this sort of activism at the local government level as the foundation upon which an equitable world can be built.

“I probably will get involved in politics at some point in my life because I do believe that’s an avenue to change,” Gaelynn concludes. “Without legislation and a way to enforce it, then we’re just counting on people and their good will, which can take forever. I’m not willing to wait that long.”