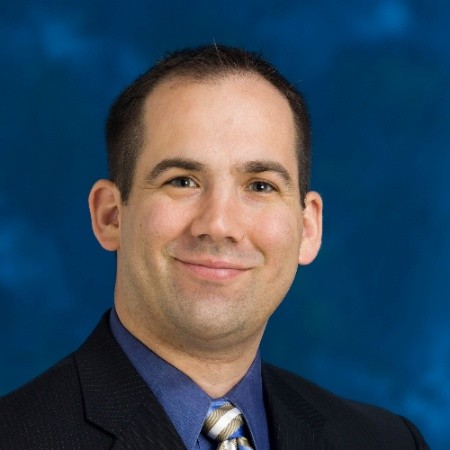 Chad Dillon, who began losing vision in his 30s, recently applied for and won a vending contract through Missouri’s Business Enterprise Program, which grants blind entrepreneurs the first right of refusal to operate business facilities in government-owned buildings through the Randolph-Sheppard Act.

After a series of interviews and evaluations, Chad was cleared to embark upon a 26-week training course, a hands-on curriculum to teach him the ins and outs of managing vending operations of all sizes, everything from single vending machines to entire cafeterias. Dish washing, inventory, pricing – regardless of the task, Chad soaked up the knowledge like a sponge.

“The thought process is not that you’re going to do all those things yourself, necessarily, but if you’re going to hire someone, then you need to know how to do whatever it is you’re asking them to do,” Chad explains. “If you don’t know how to clean a grill, then how can you teach someone else to? I agree with that methodology.”

Upon completion of training, the time came to bid on prospective vending sites. Would-be vending managers receive basic information on different government buildings where there are vacancies in vending service. If a particular location sounds appealing, then another round of interviews and paperwork begins, eventually culminating with the awarding of a new vending contract.

In August of this year, Chad officially became manager of Archive Market, a convenience store and snack shop located within the National Personnel Records Center and National Archives building in North St. Louis County. Chad says the location comes with a captive customer base.

“It’s one of those things where employees come in the morning and stay; they don’t leave,” Chad explains. “They can come downstairs and we’ve got sodas, snacks, salads, and hot and cold sandwiches.”

When the previous vending operation at the National Archives building faltered, employees were left with no real dining options on site. Eventually, food trucks were permitted to do business on the premises twice a week, providing lunches to hungry workers. Still rolling up to the work site, they are fierce competition for Chad.

“I want to get our product offerings in line with what customers can get on the outside but provide it at a much better price,” Cha declares.

Prior to being a vending entrepreneur, Chad served as a district executive with the Greater St. Louis Area Council of the Boy Scouts of America where he flourished as a fundraiser, marketer and recruiter. He increased donations by 57 percent in four years, launching a successful career that would span more than a decade.

Unfortunately, the degenerative retina condition Chad was diagnosed with at age 23 began to manifest in earnest, forcing him to relinquish his driver’s license and making it nearly impossible to handle his duties with the Scouts. After hanging up his uniform for good in 2012, Chad transitioned to a career in property management, overseeing the operations of student housing facilities in East Peoria and St. Louis. While he enjoyed interacting with students and the fast-paced nature of the work, five years of dealing with the volatility of property management was enough.

Chad’s next move was uncertain, however. He knew he wanted to continue working, but his increased vision loss diminished his confidence a bit. In December 2017 he met with Susan Menhard, Director of the Starkloff Career Academy. They agreed he would enroll in SDI’s capstone course the following spring, a decision that helped reinvigorate Chad’s job search.

“I wanted to get some tactics for how to present my disability. It’s a hidden one. You don’t really know until I bust out a cane,” Chad says. “I wanted all the tools I could possibly have, and that’s why I wanted to be part of it.”

Chad believes the course helped him regain the confidence that made him so successful in previous careers, and he encourages any adult with a disability who is at a crossroads in their career to consider the capstone course.

“If you’re out of school, and you want to get to work and make something happen, it’s a great opportunity,” Chad states. “If you’re like me and find yourself in a transition period in your life, it’s a really helpful program. Everything that happens from here on out is my responsibility, regardless of what might have happened the day before, and I like that pressure.”