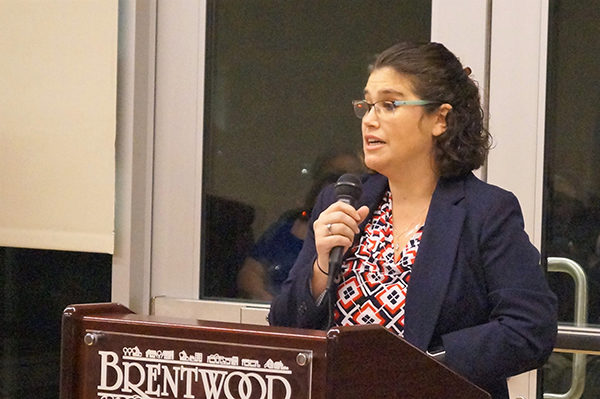 Laura began her career with the Natural Way food store chain. She worked her way up to store manager where she learned she had a knack for Human Resources. Laura entered Webster University in 2010, graduating in 2017 with a Bachelors degree in Management and a Masters in Human Resource Management. Soon after, she learned about the Starkloff Career Academy through Cindy Yamnitz, Assistive Technology Program Coordinator at Webster University.

Born with an impaired right arm, Laura had no idea the class would challenger her to think differently about her disability. “I though the class was just going to teach us how to write resumes amid basic concepts on how to find a job,” said Laura. Instead, she found herself confronted with the idea of embracing her disability rather than letting it hold her back.

“Going through this class has given me the conference I needed to see that my disability should not stop me from getting a good job that I love,” said Laura. “Each week we learned different techniques to build a network and support group to help me when I felt discouraged.”

Laura took a part time job after graduating, but she never lost sight of her career goal. Thanks to her hard work and a collaboration between Starkloff Disability Institute and Missouri Vocational Rehabilitation, Laura was able to network her way into an interview with Spectrum Healthcare Resources. Not long after, she was offered a position as a management trainee. Two months later, Laura proudly reported she had been given a promotion.

Laura was invited to speak at the opening of the Fall 2018 Capstone Course which began September 25th.

“You will have ups and downs,” Laura said to the newest Capstone Course students, “but it if you believe in yourself and use the tools that you learned in this class, you will be successful in finding a job.  Just keep putting one step in front of another and believe in yourself. You can do it.”