Guiding the next generation to meaningful employment 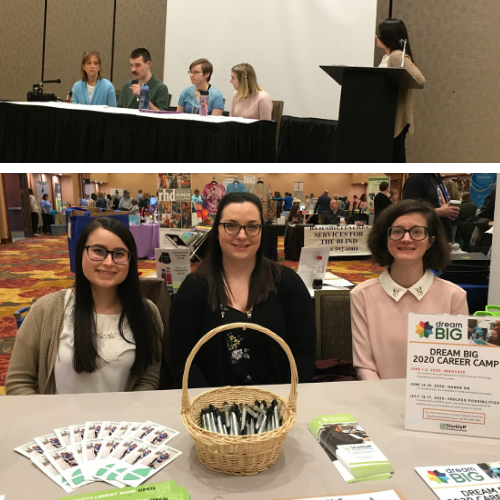 For many students, the freedom of college life is intoxicating. But for those on the autism spectrum who are used to the predictable rhythms of high school, the sudden lack of structure can present challenges.

Katie Schleicher, a recent graduate of Webster University who is currently involved with Access U, described this to the audience that gathered for SDI’s panel discussion, “Navigating the Path from High School to Career.”

Schleicher’s impactful story was one of many throughout the presentation. Panelists included several other current and past Access U participants: Olivia Apollo, a current Webster University student with Cerebral Palsy (CP) who is pursuing a double major in anthropology and international studies; Dylan Farmer, who has CP and autism, is a graduate of Maryville University and presently works at the National Archives; and Patsy Farmer, Dylan’s mother who offered the parent’s perspective.

Fields was pleased with her panelists and blown away by the response of the audience. “Every presentation at the convention was different, but I don’t think anyone facilitated a discussion quite like ours,” she says. “The Arya Foundation reached out to me afterward and informed me that our presentation was one of the most well-received and that they had gotten great feedback from it, so that’s very exciting.”

The DAC is an eclectic conference bringing together more than 50 disability-focused organizations, nonprofit and commercial ventures alike. Fields says the DAC is a refreshing departure from the typical tabling assignment. “A lot of the events we attend are for nonprofits only,” she explains. “This was a nice mix of presenters, and it was pretty cool.”

“A lot of families were interested in what we did, and many other organizations were curious about what we had to offer because they want to share resources with their clients,” Fields observes. “Our sign-up sheet was pretty full, and I think it was one of our better events.”

As Dammerman points out, the only guests who didn’t seem immediately poised to enroll in DREAM BIG were the parents of children who were too young for camp. “For most of the people who were less interested or not quite ready to commit, it was specifically because their student was only around six-years-old,” she says.

Nonetheless, Fields insists that reaching the parents of young children with disabilities is a crucial component.

“I think it’s especially important to make sure parents know early on that their kids can have meaningful careers,” Fields says. “I know Colleen [Starkloff] wants to get to a place where we can serve younger students. We’re not there yet, but setting those goals and showcasing successful role models early on is really important.”