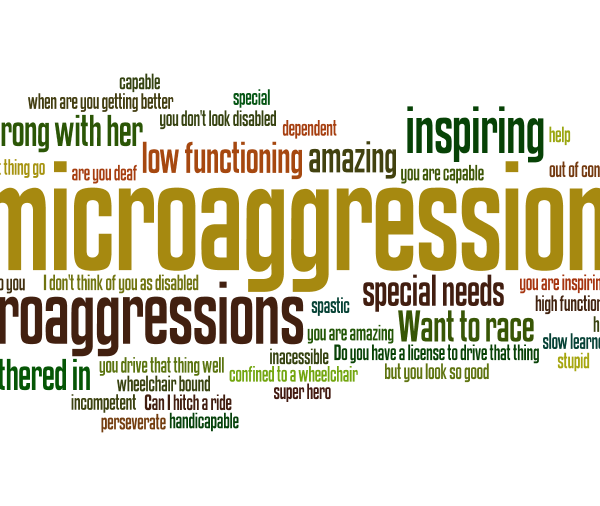 “What are microaggressions, and how do I respond to them at work?”

Microaggressions are the “commonplace daily verbal, behavioral or environmental indignities, whether intentional or unintentional, that communicate hostile, derogatory or negative prejudicial slights and insults toward any group, particularly traditionally marginalized groups.”

In other words, they are the little, everyday reminders that a person in a minority group doesn’t matter to the majority. They are micro because, like a virus, they’re hard to see and don’t have much of an impact on their own; however, when occurring in large numbers, they can be devastating.

A microaggression might take the form of a poster depicting a disabled athlete with the message “What’s your excuse?” a cashier sighing and making a face when you ask for help, a parent describing their child as “special” rather than “disabled,” or a manager disregarding an employee’s concerns that a new website won’t be accessible to screen readers. The cumulative effect of these moments is to reinforce the idea that people with disabilities are somehow less than or unimportant.

Most microaggressions are the result of ignorance. We act out the examples we’re given as children, so if you were told as a child not to say “disability,” you’re going to have a hard time saying it as an adult. It takes effort to realize how powerful your words and actions can be. That’s why responding to microaggressions whenever you see them is so important.

If you’re on the receiving end of a microaggression, or if you observe a microaggression in action, don’t stay silent. If a cashier has a bad attitude, talk to the supervisor. If the manager doesn’t understand why a website needs to be accessible, remind them that people with low vision have a right to digital accessibility. If an advertisement wants to use disability to inspire, ask them to think about what their message says about disability.

Standing up against microaggressions is especially important if you’re an ally. Members of minority communities’ efforts are often disregarded simply because they are a minority, and it can be exhausting to fight against. As an ally, it is important to remember that the discomfort you feel when confronting microaggressions from your friends and colleagues is small compared to the challenges people in minority communicates face every day.