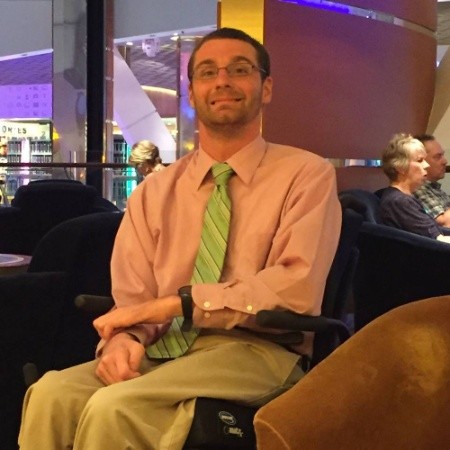 For Matt Newbold, a current participant in the Starkloff Career Academy Capstone Course, a simple shift in perspective has sparked an empowering new approach to life.

“I used to be so worried about changing my surroundings to fit my needs, but eventually I realized I should just focus on bettering myself,” Matt explains. “As someone with a disability, the world tries to keep you in a box, but you don’t have to stay there. You don’t owe the world anything.”

As a child, Matt was diagnosed with dystonia, a neurological movement disorder characterized by involuntary muscle contractions. Primarily affecting his mobility and speech, Matt uses a wheelchair and leg braces to get around.

Despite a society that’s not always accessible or welcoming to individuals with disabilities, Matt’s maintained a fairly positive outlook.

“I think I’ve handled it pretty well,” Matt declares. “I could have fallen into that dark place, but I’ve made it a point not to let myself do that. I’ve never let it slow me down.”

As people often do, Matt finds solace in things like music and chess. He immerses himself in computers and video games, virtual realms free from the obstructions that so regularly litter the physical landscape. That’s not to suggest he avoids the outdoors. Matt enjoys fishing and rolling through scenic parks whenever he gets the chance.

As he was discovering these creative outlets and recreational opportunities, Matt was also growing as a person, steadily gaining confidence while caring less about how others might perceive him.

“When I was a kid, people would notice me on the playground. I got made fun of sometimes and became sort of self-conscious,” Matt recalls. “At a certain point, I realized that this is who I am and there’s nothing I can do to change it. I gradually became more comfortable, and now I’m what you would call a people person.”

After graduating from high school in 2002, Matt’s career plans were a bit uncertain. Initially, he took a job at Target, a nice preliminary work experience where he did a little of everything.

“I just sort of worked the floor — cleaning, straightening merchandise, prepping products and stocking shelves,” Matt recounts. “I enjoyed dealing with customers and answering their questions.”

Later, Matt took a similar customer service role at Marcus Theaters, a position he would remain in for nearly eight years. While he liked his co-workers and was happy to serve the movie-going public, Matt soon realized he needed more of a challenge in his professional life.

So he began classes at the University of Missouri–St. Louis (UMSL), ultimately graduating in 2017 with a Bachelor’s in Business Administration. The offers didn’t immediately start rolling in, however.

“Right out of school I had a one-track mind, basically just going for Business Analyst jobs,” Matt acknowledges. “After a couple years of that, I started opening up to other ideas, pursuing careers involving Data Analytics and Supply Chain Management.”

To further bolster his resume, Matt is presently enrolled in a Salesforce Vocational Training program through BCI (Boone Center, Inc.) Skills Center, which includes an internship where he applies his newfound knowledge of workflow rules and processes to improve data quality models.

Matt didn’t stop there, either. He recently started on LC101, the free Web Development course offered through LaunchCode. Not to mention, he’ll be completing our Capstone Course soon as well, a unique journey he says has exceeded his expectations.

“At first, I just thought that it couldn’t hurt. It might even inform me of some new strategies I can use in my job search,” Matt admits. “Now we’re over halfway through it, and it’s been a great experience. By listening to everyone’s different viewpoints and exchanging personal experiences, I’ve heard a lot of things that I needed to hear and explored some topics I didn’t know about.”

While Matt is confident in his ever-expanding set of professional skills, he recognizes the uncertainty that accompanies any job search.

“Now that I’ve studied some Data Analytics and have familiarity with a couple of programming languages, I feel pretty good about getting out there and applying again,” Matt states. “I feel more optimistic, but the job market’s a fickle thing, so we’ll see.”

According to Matt, becoming a viable job candidate takes more than earning certificates and acquiring skills. It’s about refusing to be distracted by external forces.

“Be comfortable with yourself. Just realize that you can’t control how other people feel or how they view you,” Matt suggests. “If people are going to react negatively, that’s on them. It’s not on you. Don’t let it discourage you from doing what you want to do.”