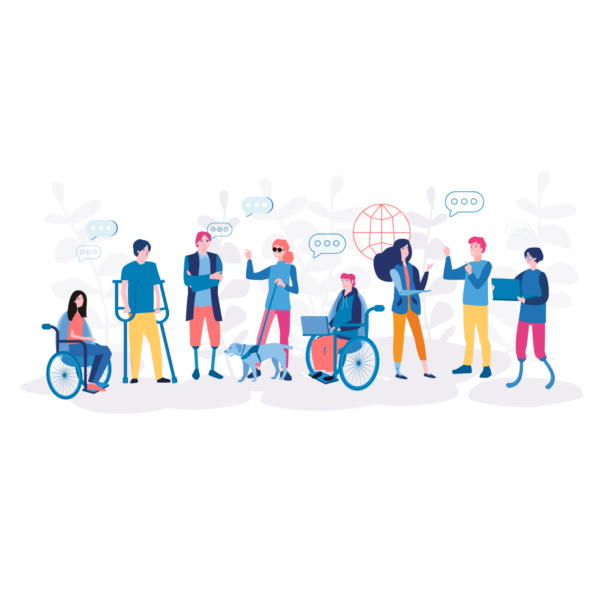 Sometimes, large-scale tragedies and hardship have a unifying effect, bringing people together through a shared sense of loss and common need for resilience. But events like the COVID-19 pandemic also have a unique way of shining light on some of our more regrettable truths, dragging them out into the open where they cannot be ignored.

“My dad tells me about the Selma Bridge Demonstrations and how, for so many Americans, that was the first time they saw racism in action,” says Jason Hartsfield, Career Advisor and Disability Lead Consultant at the Starkloff Disability Institute. “COVID’s kind of the same way. It’s the first time many of us are seeing these disparities and their consequences facing the disability community, and a lot of Americans are asking for change.”

Prior to the pandemic, people with disabilities were less likely to graduate high school, less likely to be gainfully employed, and more likely to be living in poverty than their nondisabled counterparts. COVID-19 has conspired to exacerbate these inequities even further. These challenges are widely documented, but more troubling trends have emerged over the last year-and-a-half as well.

The American Civil Liberties Union has filed suit against eight different states during the pandemic for medical rationing programs targeting people with disabilities. How can this be possible in a society that so vehemently professes its commitment to diversity, equity and inclusion? Recent survey results indicate negative perceptions of disability still pervade the healthcare industry.

How does the nation’s largest minority group slip through the cracks of the healthcare system so easily? Several factors are involved. The perception of disability as a medical diagnosis rather than a social identity contributes to the lack of public health data. People with disabilities are drastically underrepresented in the medical profession, and that lack of a voice trickles down to the consumer. When insurance providers mandate the number of minutes doctors can spend with patients, there’s no time to discuss socioeconomic status or disability ownership. As Jason points out, ego can also play a role in the dismissive attitude toward disability.

“It’s really hard for doctors to admit there are things they can’t treat. They seem to think, ‘I can’t cure this person; therefore, they must not have any quality of life,’” Jason describes. “It’s a very complex psychological issue, but to sum it up, the negative view of disability is the problem, and it’s still too prevalent in healthcare.”

The improvement of data gathering and training in public health and healthcare is one of Jason’s four keys to ensuring accessibility beyond the pandemic. The other three include: Encouraging economic security through better training and jobs, promoting digital inclusion, and challenging stereotypes and assumptions about people with disabilities.

These four areas of focus overlap in ways that are problematic but hopeful as well. COVID-19 has helped eliminate the stigma of remote work, which should create more opportunities for employees with disabilities and ultimately foster economic security. But 43% of people with disabilities don’t have broadband internet in their homes, restricting their access to virtual employment and making the job-search process itself very difficult.

Telehealth has emerged as a safe and convenient solution to a variety of basic medical needs. Non-life-threatening conditions can be evaluated and diagnosed over videoconference, reducing the number of unnecessary trips to the doctor’s office. Since transportation is one of the most persistent barriers people with disabilities must contend with, telehealth should offer a welcome alternative. But without reliable internet access, a virtual visit is not possible.

As high-speed internet access becomes less of a luxury item and more of a daily necessity, Jason calls for a corresponding change in the way it is distributed.

Of course, if more people with disabilities were gainfully employed, then they could more easily afford their high-speed internet. But income limits imposed by Social Security and the threat of losing medical coverage often discourage individuals with disabilities from pursuing managerial roles and upper-level positions in the professional realm. Despite the growing emphasis on diversity and inclusion, job descriptions and hiring practices are too frequently tainted with inherent bias.

Questions surrounding disability inclusion in healthcare, economic security and digital access can be answered by challenging stereotypes and assumptions. Stories of disability ownership and pride go a long way toward dispelling preconceived notions. But this responsibility doesn’t fall solely to the disability community. Whether they’re HR professionals, web developers, doctors or public officials, nondisabled people must be willing to listen without judgment and take action accordingly.

“I’ve personally worked with 250 candidates over the years, and all 250 of them could tell me about a time they were discriminated against. The fact that they felt that way is what’s meaningful,” Jason concludes. “If you do not include them in the conversation, refuse to follow their lead and continue to disregard those little things that make them feel isolated, then you cannot have meaningful change.”