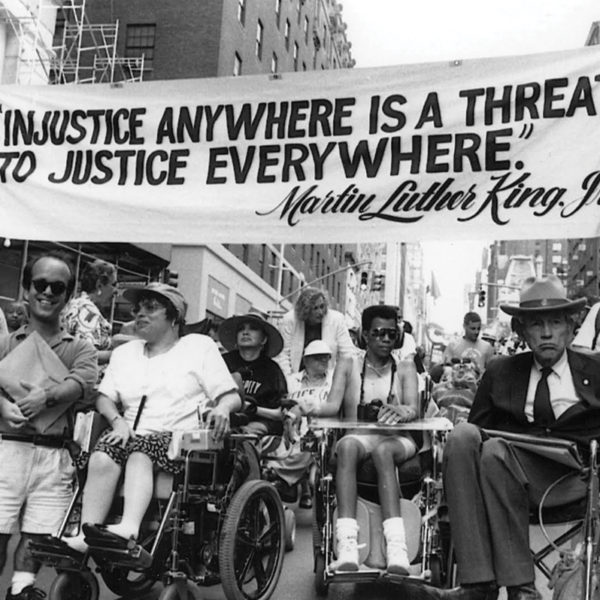 Dr. Martin Luther King Jr. Day is a time for all Americans to reflect upon Dr. King’s efforts and accomplishments, as well as his unrealized goal of creating a fully equitable and accessible society. In the years following his death, two important issues regarding Dr. King’s work and the Civil Rights Movement seem to have been forgotten, eliminated or at least obfuscated, either intentionally or inadvertently by the mists of time. First, we fail to emphasize Dr. King’s important realization, only a year before his assassination, that his Civil Rights Movement had to include all marginalized people, an insight that linked the Civil Rights and the Disability Rights Movements. Secondly, as he broadened the audience included in the movement, he narrowed the focus of his activity to the issue of employment as the key to achieving the goal of a Just Society.

Most people equate the words “minorities and civil rights” with African-American populations; whereas people with disabilities are seldom perceived of as a minority at all, when, in actuality, they comprise the largest minority group in the US. Each minority group has its own life experiences and different sources and degrees of oppression and discrimination. Granted, a blind person has never been lynched because he or she is blind, nor has a person who uses a wheelchair had a cross burned in the front lawn because he moved to a certain neighborhood. Nonetheless, people with disabilities have been marginalized all throughout history.

African American children were prevented from attending certain public schools by codes and laws. Children with disabilities were prevented from attending certain schools by smiling and well-meaning education officials who told parents that “it is better for both children with disabilities and ‘normal’ children if the disabled kids are educated at home or at least in ‘special classes.’” Both experiences, be it overt or covert discrimination, represent the exercise of the establishment’s power. But “Separate Is Not Equal!”

While people with disabilities cannot equate their experiences with 500 years of slavery and dehumanization, that shouldn’t discount the consideration that members of this minority group, all throughout history, have suffered from dehumanization, infanticide, euthanasia, and institutionalization.

It was less than a year before his assassination that Dr. King decided to include all marginalized people into a movement that would make the nation realize and appreciate the injustice, oppression and antidemocratic nature of poverty and lack of opportunity. Though people with disabilities were probably not on his radar screen or involved in the movement at the moment they were taking notes and realized sooner than many African-American leaders that not only is “Separate Unequal! Separate is also Weak and Ineffective!”

Just as Dr. King decided to change and re-create his movement, mainstream American history decide to change its view of Dr. King’s tactics and his objectives. In his book, The Radical King, Cornell West asserts that Dr. King has been deodorized, sanitized and “Santa-Clausified” by history. Due to a type of “historical amnesia,” West notes people have forgotten that almost ¾ of White Americans perceived Dr. King as an unpatriotic threat to this country because of his attitude and actions concerning the Vietnam War and ending Poverty. West also points out that, “even a slight majority of African-Americans believed that Dr. King was, “setting the black freedom movement back.”

In fact, one of the most iconic pictures in the collective memory of the US is Dr. King giving his “I Have a Dream” speech at the Lincoln Memorial. Very few people will remember that that the FBI sent out a memo decrying Dr. King as “the most dangerous Negro of the future in this nation from the standpoint of communism, the Negro and national security” and even fewer will recall that Dr. King’s “I Have a Dream” speech was given to publicize what Dr. King described as the Fourth Revolution, which he called the “Poor People’s Campaign” and that that particular event at the Lincoln Memorial was named the “March for Jobs.”

Dr. King realized that employment was the key to self-sufficiency, independence, and equality. “If a man doesn’t have a job or an income, he has neither life nor liberty nor the possibility for the pursuit of happiness.”

The general population is quite familiar with Dr. King’s statements, such as “injustice anywhere is a threat to justice everywhere” and with his dream that his children might be judged “not by the color of their skin but by the content of their character.” Do you think there’s a chance that we’ll hear the following quote from Dr. King in 2019? “A nation that continues year after year to spend more money on military defense than on programs of social uplift is approaching spiritual death.”

In short, Dr. King realized that all marginalized groups—such as African-Americans or Americans with disabilities—must join together and form one united and powerful force working for everyone’s civil rights. Access to meaningful employment and economic independence will help us realize a more just society for all. This year let us remember that in unity we can tap into Dr. King’s power.