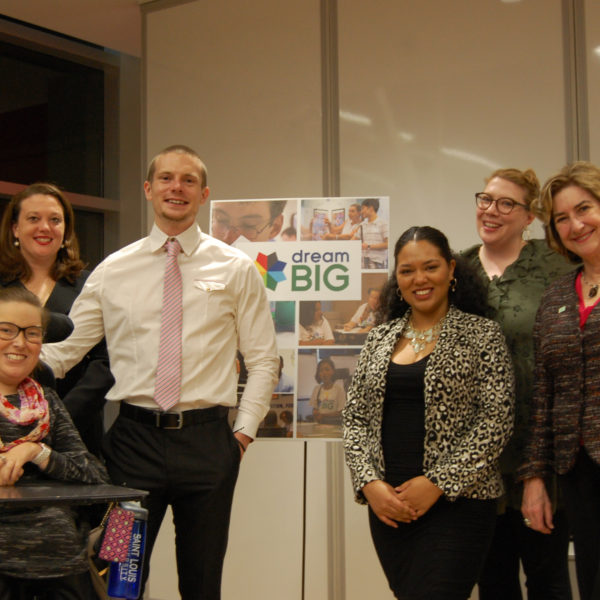 Before a packed auditorium at Maryville University on the evening of March 14, autism and mental health advocate Russell Lehmann spoke candidly about the personal struggles he faced growing up and how he learned to face them head-on.
An audience consisting of educators, advocates and parents of children with autism listened intently as Lehmann described a tumultuous upbringing marked by a range of developmental and behavioral disabilities.
“It is important for young people with disabilities and their parents to hear directly from others like them who can serve as role models,” Sarah Schwegel, Youth Transition Coordinator at SDI says. “That is why the DREAM BIG program brought Russell Lehmann to St. Louis to share his story.”
Motivational speeches can sometimes take an overly optimistic tone, loaded with hopeful clichés, perhaps lacking authenticity. Lehmann, however, recounted some of his lowest points in painfully honest detail. Before he was properly diagnosed, Lehmann experienced debilitating symptoms of obsessive compulsive disorder, anorexia, extreme social isolation and post-traumatic stress. During perhaps the darkest period of his life, Lehmann found himself unable to bathe, dress or leave the house for nearly two months.
After countless inconclusive doctor visits and a lengthy stay in the psychiatric ward of the children’s hospital, Lehmann and his parents visited the University of Washington’s Autism Center. There, at age 12, Lehmann was diagnosed with autism. Relieved to have an answer, but understanding a difficult road stretched before them, Lehmann and his family worked with the center to devise education and treatment strategies.
At times, Lehmann could find relief in things like physical exercise, but he eventually discovered writing as a therapeutic outlet. He became especially fond of poetry, filling pages upon pages of his own verse. Throughout the evening at Maryville, Lehman would break from the presentation to recite one of his original works, drawing enthusiastic applause from the audience.
As he explained to the audience, Lehmann credits his expression through writing as the catalyst for overcoming his inability to communicate and interact with the world around him. He rapidly improved as a student, achieving academic honors and playing high school football.
Lehmann published his award-winning book of poetry in 2011, “Inside Out: Stories and Poems from an Autistic Mind.” As a noted author, motivational speaker and mental health advocate, he now travels the world telling his story of triumph over adversity.
By constantly pushing himself beyond his comfort zone and confronting his fears head-on, Lehmann said he has learned how to live a rich, fulfilling life with autism. As he explained to the audience, this philosophy of pushing boundaries can be applied to any type of disability or life challenge. The key is learning from past experiences, not being afraid to tackle new ones, maintaining strong relationships with family and community, and never giving up the fight.
After a thunderous ovation, Lehmann answered questions from the audience. A dessert reception and book signing followed, giving everyone the opportunity to meet Russell and thank him for his message.