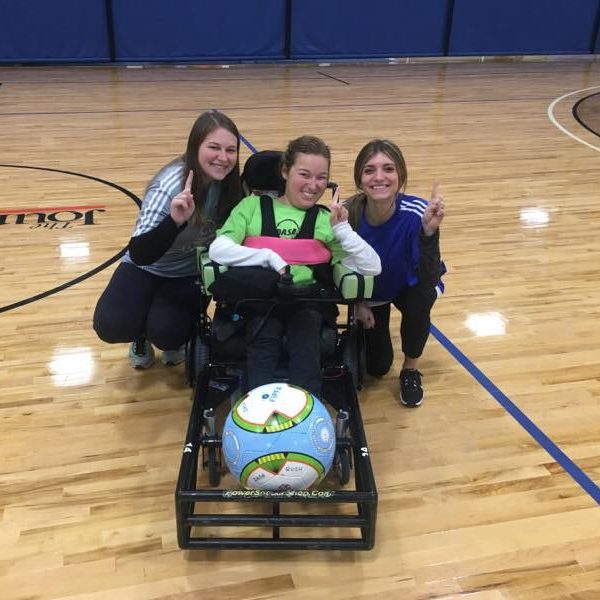 After seeing a demonstration of power soccer at a summer camp for kids with muscular dystrophy, 14-year-old Sarah Schwegel knew she just had to play.

But she had to strike a deal with her mother first.

“I immediately asked my mom if I could start playing, and she said I had to quit something else first,” Sarah recalls.

Between swimming, horseback riding and girl scouts, not to mention school, Sarah’s mom didn’t see room for power soccer on the schedule.

As they say in soccer, it came time for girl scouts to be relegated. Scouts couldn’t quite match the intensity, strategy and sheer enjoyment of power soccer.

“It’s a high-energy game,” Sarah says. “It’s a great opportunity for people with mobility disabilities to play a team sport.”

A four-on-four game, power soccer is contested indoors on a basketball court. Competitors have varying degrees of mobility impairment, but once they strap into their chairs, the playing field becomes level. Players use the bumpers of their chairs to dribble, pass and shoot the ball. Chairs are custom-built specifically for power soccer, the most elite of which can cost up to $10,000.

Now in her 11th year as goalie of the St. Louis Cyclones, Sarah initially gravitated toward the position because her chair at the time didn’t allow the maneuverability necessary for playing offense. By the time she got a new chair, she was already obsessed with being in the net.

“I was just into playing goalie,” Sarah says. “I took it as a personal challenge to record a shutout as often as I could.”

It’s happened often enough for Sarah to be considered one of the top goalies in the United States Power Soccer Association (USPSA). She recently tried out for Team USA, but she won’t learn her fate until October when the Selection Camp Roster is announced.

Sarah has a strong supporting cast. The Cyclones, affiliated with the Disabled Athlete Sports Association in St. Peters, recently finished ninth in the Premier conference of the MK Battery Conference Cup Series, the national championship tournament for power soccer. Held annually in Fort Wayne, IN, the 2019 event featured 39 teams from across the country competing in four different conferences according to experience level and past success.

While this year’s finish means the DASA Cyclones will be moving down a conference next season, no one is hanging their head.

“It’s where we expected to be. You always want to do better, but I’m not mad about it,” Sarah says. “We played hard and we played well. Overall, the event was great.”

In addition to playing, Sarah also serves on the USPSA Executive Board, so she helps plan the banquet and other festivities surrounding the national tournament. Being part of such a unique collection of athletic talent means a great deal to her.

“It’s always great to see other athletes from across the country. There’s such comradery when you get individuals with disabilities together. We got to spend some good time with our power soccer family.”