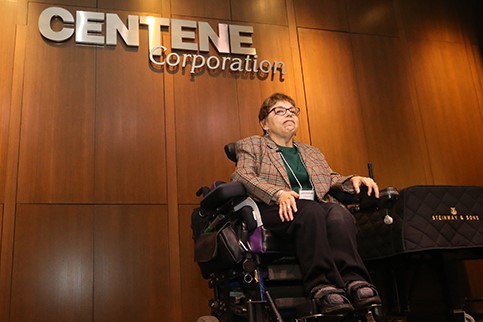 A crowd of disability advocates and business leaders gathered to meet and hear internationally recognized disability rights leader, Judith Heumann, at a special event held on November 14 in St. Louis. The Centene Corporation hosted the event in the auditorium of their Clayton headquarters.

Heumann is currently a Senior Fellow at the Ford Foundation, and recently served as the first ever Special Advisor on International Disability Rights for the U.S. Department of State, from 2010–2017 under the Obama Administration, where she fought for the rights of people with disabilities around the world.

Wake Rakes, Chief Diversity Officer for Centene welcomed the group to their campus and spoke of Centene’s dedication to the disability community, and in particular, the full employment of people with disabilities.

Colleen Starkloff introduced Heumann, saying “It is our honor to welcome Judy to St. Louis and to Centene.  Her work in the field of disability rights is monumental.  In my opinion, Judy is the most influential disability rights leader in the world today.  She has visited most world nations, met with Ambassadors, Ministers and Presidents, as well as local disability groups in their communities and shared disability rights and independent living philosophy with those connections.”

Heumann told her personal story of growing up as a person who had been affected by polio. She fought for equal rights in education and in employment. She was a pioneer, who helped blaze trails for others.

A native of Brooklyn, NY, Judy graduated from Long Island University in 1969 and then moved to Berkeley to attend graduate school and helped to cofound the Berkeley Center for Independent Living where she served as its Deputy Director and then on its Board from 1973-1993.

Heumann served more than 8 million Americans with disabilities in her role as the Assistant Secretary for the Office of Special Education and Rehabilitative Services in the Department of Education in the Clinton Administration from 1993 through 2001. She was responsible for the implementation of legislation at the national level for programs in special education, disability research, vocational rehabilitation and independent living.

She served as the World Bank’s first Adviser on Disability and Development from 2001-2006. In this position she helped the Bank include disability in discussions with client countries.  Heumann improved policies, programs and projects that allow disabled people around the world to live and work in the economic and social mainstream. She was Lead Consultant to the Global Partnership for Disability and Development 2006-2007.

Judy is a recipient of the following awards:

Heumann has worked on the domestic and international front to advance human rights for people with disabilities for more than 45 years. She has been active with Disabled Peoples’ International, Rehabilitation International and numerous Independent Living Centers throughout the world.

In addition to her fellowship at the Ford Foundation, Heumann’s social media project, The Heumann Perspective, is intended to broaden and spur discussions on the intersectionality of disability rights.

The Starkloff Disability Institute thanks Centene Corporation for their generous underwriting of this speaking engagement with Judy Heumann.