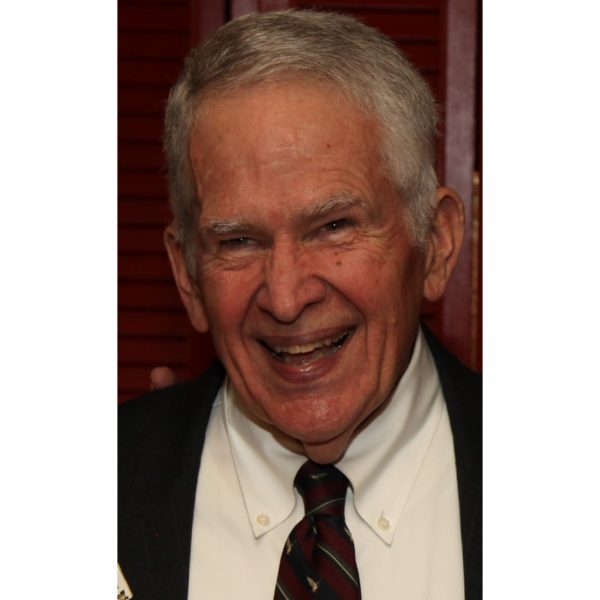 SDI’s Gold Star Board Member Award is just the latest in a seemingly endless procession of accolades bestowed upon William (Bill) Sheldon over the years.

A Distinguished Alumni Award from the Central Institute for the Deaf, Fair St. Louis’s Mel Loewenstein Distinguished Volunteer Service Award, the Round Table Representative on Deafness Humanities Award, various honors from the Boy Scouts of America – these are the hallmarks of a life spent advocating for disability rights and serving others. But the Gold Star distinction from SDI is especially meaningful and somewhat unexpected, according to Bill.

“I was surprised. This is a different kind of award from others I’ve received,” Bill explains. “It’s kind of like a lifetime achievement award for an SDI board member, and I think it’s wonderful.”

Bill has always been an energetic ambassador for disability rights, an attribute SDI Board President Steve Degnan noticed right away.

“He is both inspirational and charismatic in the way he passionately represents the deaf community,” Steve remarks.

Bill has served terms as Secretary and Treasurer since his appointment to SDI’s Board of Directors in 2010, but his connection to the Starkloffs goes back much further. Bill recalls first meeting Max at a dance for area youth when they were both just teenagers, long before the car accident that would render Max a quadriplegic. Little did they know that they would one day work together to build the revolutionary center for independent living that would come to be known as Paraquad.

“We were both probably about 15-years old when we first met. I couldn’t believe how tall he was. I was just a shorty, but he must have been about 6’5” already,” Bill recalls. “Max moved away and we lost touch for many years. We reconnected in 1975 when we were both serving in the disability field. I met Colleen for the first time at a meeting in Jeff City. Once Paraquad received its first federal grant a few years later, they invited me to come work with them.”

Bill took over as Paraquad’s Director of Deaf and Hard of Hearing Programs, a role that would keep him busy for the next 24 years. Since Bill was without hearing and Max couldn’t use sign language, it seems reasonable to ask how they were able to communicate. Bill offers a simple explanation.

“I’m very skilled at reading lips. I can read lips in English as well as French and German, but not Latin,” he admits. “I began learning how to speak and read lips as a young child at the Central Institute for the Deaf, but I was 39-years old before I ever learned to sign. So I was already a grownup in the hearing world well before I joined the deaf world in its fight for advocacy and independence.”

Bill engineered the first federally funded deaf and hard of hearing program of its kind at a center for independent living, and he of course helped Max and Colleen dismantle physical and attitudinal barriers facing individuals in wheelchairs.

Bill also used his position at Paraquad to strongly encourage local television stations to implement the closed-caption technology that’s ubiquitous now, but virtually unheard of in 1980. People with disabilities are never done advocating for themselves, though, a fact he would soon be reminded of.

While working at Paraquad and attending graduate school at the University of Missouri-St. Louis (UMSL), Bill was informed by school administration that there was no money left in the budget to cover his deaf interpreter expenses. While reading lips was preferable to him for one-on-one conversations, Bill required the services of an interpreter for classroom discussions.

After negotiations with the chancellor fell flat, Bill filed a discrimination claim with the Office of Civil Rights (OCR) in Kansas City. After four months of legal wrangling and having to spend $3,000 of his own money on interpreters, Bill ultimately won his case and received reimbursement, an outcome he now finds cynically humorous.

“The OCR told me that UMSL received a large Federal grant for students with disabilities which should’ve easily covered my interpreters,” Bill says. “It was ironic because the Chancellor was deaf in one ear and listened to an attorney who knew nothing about the Federal law for the disabled (Section 504 of the Rehabilitation Act of 1973).”

Bill’s pending legal action against UMSL nearly caused an unintended consequence for Max as well. After initially extending an honorary degree to Max in recognition of his contributions to the disability community, the university temporarily revoked the honor upon learning of Bill’s association with Paraquad.

Max remained steadfast in his support, far more concerned with Bill’s battle for equal access than the prospect of receiving an honorary degree. Although UMSL administration eventually came to its senses and upheld Max’s award, the situation made for some tense moments.

“UMSL requested a list of 10 family members and friends Max would invite to a banquet following the presentation of his degree,” Bill recounts. “My wife Kathy and I were on the list, and so was the chancellor’s lawyer. Needless to say, he was not friendly with me.”

Since retiring in 2003, Bill has remained engaged in the community by serving on various boards and councils. In addition to his work with SDI, he continues as a valued board/committee member with the Central Institute for the Deaf, the Office of the Disabled Advisory Council, the Deaf Professional Advisory Committee and the Home Care Givers Program for the Deaf.

Bill is the very embodiment of an adage he coined during a lecture at the 1971 UNESCO Conference on Deafness:

“If you share happiness into the world in which you live, you will receive happiness in like measure in return.”