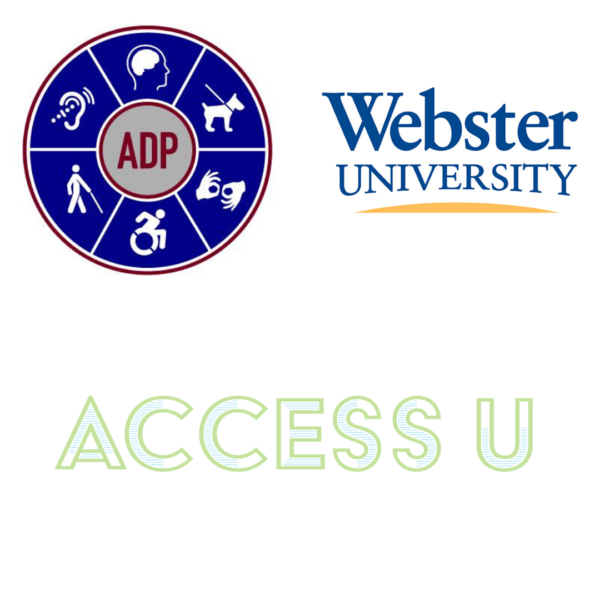 All too often, college students with disabilities are treated as an afterthought, their voices drowned out by administrative indifference, their requests for accommodations foisted upon access offices that are frequently overburdened and understaffed.

The time has come for marginalized groups to take matters into their own hands, to draw attention to inequity and bring about desired change.

More and more, college students across St. Louis are embracing this activist role. Groups like the Able-Disable Partnership (ADP) at the University of Missouri-St. Louis (UMSL) and ABLE (Abolishing Barriers through Leadership and Empowerment) at Maryville University are coming together to advocate for accessibility improvements on their respective campuses.

Olivia Apollo and Sean Mullins, current students at Webster University and participants in SDI’s Access U program, are hoping to infuse their campus with a spirit of disability-rights activism similar to what they learned from us. To that end, some special guests joined last week’s quarantine catch-up for a discussion about successfully establishing and operating a student-led advocacy organization.

Jacob Brandt is co-president of the Able-Disable Partnership, UMSL’s organization focused on disability awareness and advocacy. He says taking a proactive approach is the most effective way for a fledgling organization to encourage administrative buy-in.

“A lot of times it was just a matter of going to committee and support meetings, talking with people and writing to the people in charge of stuff,” Jacob recounts. “Before our group became what it is now, disability was kind of pushed aside. Now that we do exist and we’re talking to them about it constantly, it’s always at the top of their considerations.”

Kaci Conley is president of ABLE, Maryville’s organization devoted to accessibility and disability rights.  She adds that providing worthwhile opportunities for campus involvement creates a positive image for any new group.

“I think what encourages the support and participation of other people is that we have events that are purposeful and that go with our mission,” Kaci explains. “I think that just helps put our name out there.”

Katie Fields, our College Outreach Coordinator, serves as moderator for the quarantine catch-up events. She expresses appreciation for both ADP and ABLE’s levels of commitment and hopes such dedication spreads to other universities in the area.

“That makes me happy, and that’s why I think a presence on Webster’s campus would be so helpful. This is a student group that is overlooked in almost every decision that is made,” Katie observes.  “So I hope that once Sean and Olivia can get this group going, they can get the help and backing they need.  Hopefully our voices will be heard even more than they already are.”

While Sean and Olivia applaud Webster for prioritizing diversity and inclusion, they both agree that there are opportunities for growth.

“A large part of the problem is that disability isn’t included in the overall diversity efforts around campus,” Sean explains.

And as Olivia laments, “So many buildings on our campus aren’t even accessible. They say there’s nothing we can do about it because they’re historic buildings. But we all have historic buildings,” she sites. “I’m not trying to be inhospitable about the buildings, but people being able to use those buildings is more important than the pretty architecture.”

Tarika Walton, another founding member of ADP says that as frustrating as certain aspects of campus life might be, a student organization has a responsibility beyond simply lodging complaints.

“The best thing to do is to work with administrators in a way that helps you think like them,” Tarika suggests. “They’re going to be concerned about resources and money and if you can bring a solution to the problem, especially one that benefits everyone and uses as few resources as possible, you will be able to get them to work more easily with you.”

Alex Grandstaff is an SDI practicum student and founding member of the University of Houston’s chapter of Gamma Rho Lambda, a sorority for the LGBTQ+ community and its allies. Alex says it’s important to remember that today’s advocacy work is paving the way for tomorrow’s students.

“Sometimes with university organizations it becomes a relay race of passing that baton over and over again, recognizing that the work you’re doing now may not bear fruit until after you’ve graduated,” Alex reminds everyone.

Sean doesn’t expect immediate results at Webster, but he understands the need for prompt action.

“Most positive change takes not just years or decades or even generations,” Sean reflects. “I don’t see a better world in my lifetime, where people with disabilities are completely treated as equals.

But if we don’t start here, where is it going to start?”