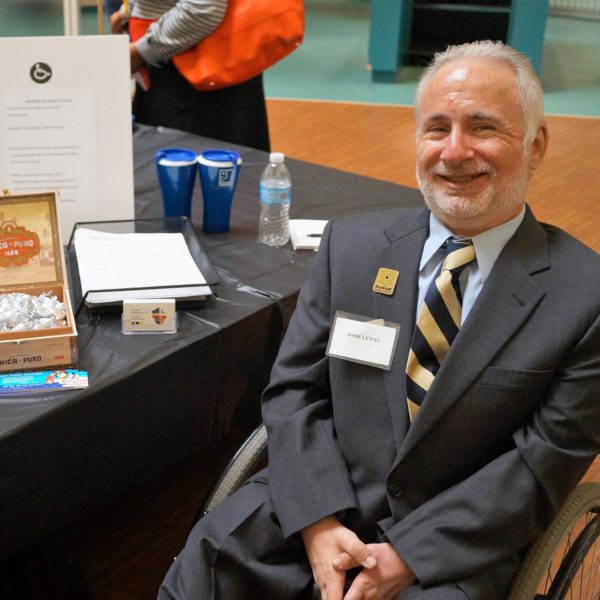 The pages of spy novels and stories of espionage fascinated and inspired Josh Lewis from a young age.

“I wanted to work for the FBI or CIA,” Lewis said. “That had been my dream for as long as I could remember, probably since the first time I saw a James Bond movie.”

Lewis relies on a wheelchair to get around. Josh suffered a broken neck and T4 spinal cord injury at birth, the result of complications from a double footling breech delivery.

The local public schools weren’t wheelchair-accessible, so the school district in Kirkwood contracted with the Special School District to arrange for Josh’s transportation to a more wheelchair-friendly school. When he wasn’t in class, Josh enjoyed giving rides on his chair and joining in on neighborhood baseball games. He could manage to swing a bat, although he sometimes lost his grip on the handle, sending the bat flying and the other boys scrambling for cover.

After graduating high school and undergoing a number of surgeries, Lewis began weighing his options for higher education. He settled on Westminster College in Fulton, MO. The college’s unique history beckoned to Josh. Winston Churchill gave his famous “Iron Curtain” speech at Westminster. Dignitaries like Ronald Reagan and Mikhail Gorbachev spoke there as well. Portions of the Berlin Wall are displayed outside a museum on the Westminster campus.

Eager to study political science, Josh thought Westminster seemed like the ideal destination. There was just one problem.

“My parents and I toured the campus,” Josh said. “It was not at all ADA-compliant, but I can be as stubborn as a mule when I want something.”

Josh was undaunted by the accessibility challenges.

“We got back to the house after the tour; it was still a little before 5:00,” Josh remembered. “I called the dean and said ‘hit the panic button. I’m coming this fall.’”

Josh was the first student in a wheelchair to attend Westminster, and the school didn’t hesitate to make accommodations. A ramp was installed at one of the dorms. An effort was made to ensure all of Josh’s classes would take place in buildings equipped with ramps or elevators. Still, the campus’s hilly terrain presented difficulties, particularly in the elements.

As an intern with the Equal Employment Opportunity Commission (EEOC), Josh did get to do some under-cover investigative work. While nothing glamorous enough for the plot of a Tom Clancy novel, Josh’s work was nevertheless important, investigating claims of workplace discrimination and harassment.

Upon completing his internship and graduating from Westminster, Josh still clung to the idea of working for an organization like the FBI or CIA. A friend got him a few phone interviews with the Secret Service, and Josh was certain his passion would set him apart. However, no job materialized.

“Part of me was a bit on the arrogant side,” Josh admitted. “I thought, ‘surely they want me. This is my calling. They want people who are willing to do whatever it takes to protect this country, and that’s what I want.’”

This was all long before Josh crossed paths with the Starkloffs. He wished he could have gone through the Career Academy back then.

The Career Academy Capstone Course helps job seekers become more comfortable advocating for themselves and disclosing their disabilities to potential employers. It teaches the concept of leveraging disability into a source of strength. These were not skills Josh possessed during his initial job searches.

“I didn’t mention the fact that I was in a wheelchair,” Josh said. “I didn’t use any schedule A letter. I didn’t know about that stuff… I kept thinking of myself as being able to get through anything without a great deal of necessity for accommodations. That was foolish on my part.”

Josh attended graduate school at Webster University, where he earned his paralegal certificate. This helped him land a job as a paralegal at a local law firm, but he was ultimately let go because of the economy. Unphased, Josh started his own business conducting research, handling paperwork and preparing briefs, typically for small law offices with heavy caseloads. Josh drew upon his investigative background to track down witnesses, a skill that kept him in demand.

Josh operated his business from 2000 to 2008, until the economy again dictated a change. Josh began teaching a course at American Military University, an online learning platform for service personnel. Essentially a college prep course for students transitioning from the military to the classroom, Josh taught the course until 2017. When that job ended, the future was a bit blurry, so Josh turned to the Starkloff Career Academy for help.

Josh attended a reverse job fare with fellow candidates and staff from Starkloff. While no job resulted, he did make some important professional connections that helped him land an interview with the St. Louis Metro Police Department. He enrolled in the Capstone Course during the winter of 2017, gaining valuable insights into self-advocacy, disclosure of disability, networking and interview skills. He found the S.T.A.R. stories to be particularly empowering. The S.T.A.R. story is a method for acing the behavioral interview process favored by many corporations today.

Josh was recently injured in a car accident. Representatives from the law firm handling Josh’s case quickly realized he was doing a lot of their work for them. Before long, they offered Josh a job as paralegal and in-house investigator, a position he currently holds. Josh credits Starkloff for instilling the initiative and networking ability to turn a painful ordeal into a lucrative opportunity.

Josh never doubted his work with Starkloff would pay off.

“Colleen and Max are titans in the disability community. They’ve moved heaven and earth to make life a lot easier for people with disabilities,” Josh said. “I figured if they could do that, then they could certainly help me improve my chances of getting a job.”