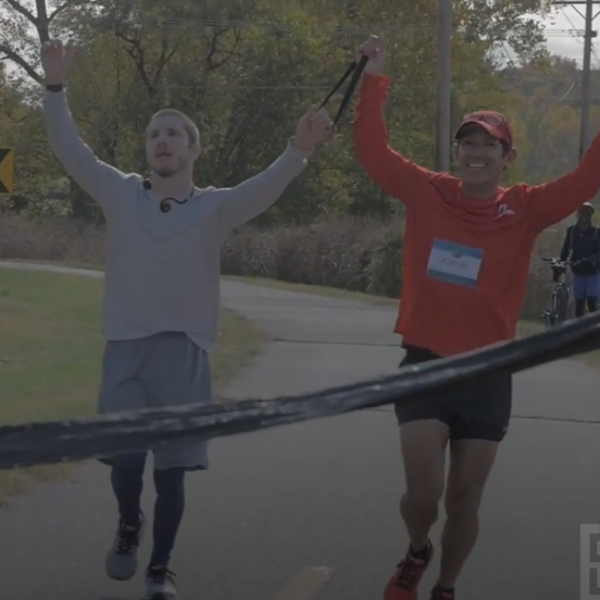 In the spring of 2019, Josh Sisson, Starkloff’s contributing writer, joined the newly formed St. Louis chapter of Achilles International. Achilles partners disabled runners, like Josh who is a blind runner, with volunteer guides to participate in races all over the world. When Josh’s first guide, Justin Brown unexpectedly passed away in the beginning of 2020, Josh decided to honor his memory by training to compete in the TCS New York City Marathon. When COVID-19 hit in March, the Marathon decided to allow its runners to complete the race from home in mid-October.

Regardless of the location, Josh had to begin training for his very first 26.2-mile race. The months leading up to the marathon were arduous, even for Josh who is regularly at the gym doing judo, jiu jitsu or wrestling. On days that his guides Robert and Jorge were available, Josh was logging miles in St. Louis’ most popular parks as early as 6 a.m. to beat the summer heat.

In addition to guided runs, Josh trained on his own to maintain his schedule of running five days a week. When his regular gym within walking distance of his house introduced new COVID regulations that restricted the use of treadmills, Josh had to adapt yet again and find other places to train.

After months of training, Josh and Jorge took on the final task of finding the perfect venue for this prestigious race. After running in a few of St. Louis’ most popular parks, they settled on the scenic trails of Madison County, IL.

“We wanted the relatively flat terrain of the Madison County Trails rather than the hilly topography of the city,” Josh explains.

The night before the race, Josh didn’t sleep too well. He describes the feeling as the “low-grade apprehension you feel when an enormous task is looming and you’re not exactly certain how it’s going to turn out.”

The next morning, Josh made some uncharacteristic mistakes like leaving his tether in the car and forgetting to pack his Gatorade for the long run ahead. Despite these rookie oversights, the first several miles went smoothly.

To fight the monotony and fatigue he began experiencing in the second half of the race, Josh put on his headphones and tried to draw inspiration from his favorite music, another decision he would later regret. He claims the jolt of energy from the music made him quicken his pace too soon, causing him to start losing stamina around mile 19. Since there are no cheering spectators positioned along the route of a virtual marathon, Josh says the last few miles were especially difficult.

But he got some unexpected support around mile 23. SDI’s Director of Development, Scott Thompson, his wife and videographer Luke Terrell were there to cheer him on. Ultimately, this was the motivation Josh needed to finish the race with an official time of 4:04:20 – only slightly above his goal of completing in 4 hours flat.

Overall, Josh credits a lot of his success to his guides.

“I think the best part was just sharing this experience with Jorge and Robert. I can’t do this stuff alone – unless I want to do treadmill marathons forever – and those guys have really gone above and beyond to help me prepare.”

Josh hopes to compete in the 2021 Go! St. Louis Marathon this spring, and encourages other people with disabilities who are hesitant about trying new sports to get started.

“You may feel a bit awkward or unfairly scrutinized in the beginning, but if you keep showing up, keep demonstrating that you’re there to learn, grow and compete, then people will start to see you as just a runner, just a wrestler, just a swimmer … whatever the case may be.”