Tricia O’Brien: Finally living and working as her authentic self 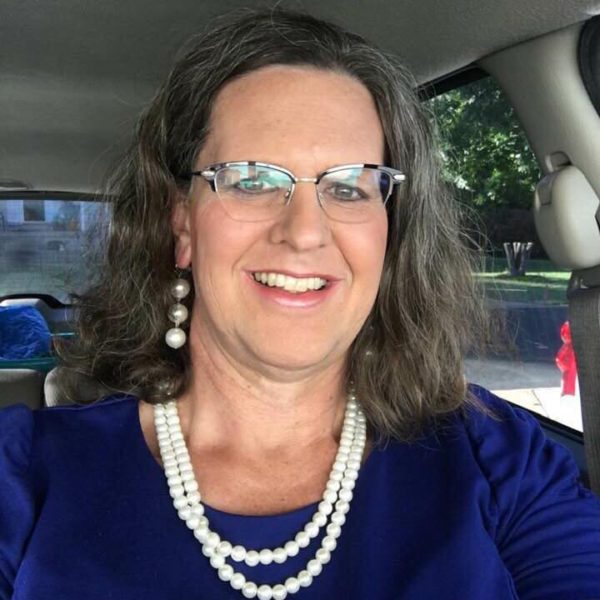 For many writers, the semicolon is nothing more than a vaguely understood, seldom-used punctuation mark. When utilized at the proper time and place, however, it can add breadth and clarity to a sentence that might have otherwise ended prematurely.

People with the semicolon (;) tattoo wear it as a symbol of their survival, a permanent reminder of how they came face-to-face with the insidious specter of depression and suicide but lived to tell about it. They are the author, the sentence is their life, and the presence of a semicolon rather than a period represents an enduring message of hope versus a tragic, untimely demise.

May is Mental Health Awareness Month, but for people like Tricia O’Brien, the grim reality of depression and anxiety persists all throughout the year. As a transgender woman, the overwhelming burden of having to conceal her true identity and conform to societal expectations drove her to the brink of suicide on multiple occasions. Tricia doesn’t have the tattoo, but thankfully, she knows how to use a semicolon nonetheless.

“A lot of folks really identify as a suicide survivor, but I’m not like that. It’s not my whole story, but it’s part of it,” Tricia explains. “I don’t want to be identified by my mental health status; I don’t even want to identify as transgender. I just want to be a woman living her life.”

Although she was born a biological male, Tricia has felt like a girl from her earliest childhood memory. Her strict, theological upbringing didn’t allow for honest discussions of gender identity, however.

“It was a religious household where that would’ve been a sin, so I didn’t talk about it. I kept it to myself, and that was torturous,” Tricia recalls. “I felt like God hated me for having this desire, so I eventually decided maybe I could earn his love back by becoming a Catholic priest. So I spent six years studying at the seminary, but I’ve obviously had a career change, an entire life change, really.”

Tricia ended up at St. Louis University (SLU), where she earned a Master’s Degree in social psychology in 1996. Here, she discovered an affinity for data and statistical analysis. She continued to outwardly identify as male, not yet ready to reveal her secret to friends and peers. Laughingly, she recalls her attempts to pick up women in college, not because she desired an intimate relationship but because she wanted to fit in and have friends.

Tricia’s previous dating experiences didn’t prevent her from ultimately marrying a woman, though. While the strained partnership produced three children and lasted 18 years, it didn’t transform Tricia into the stereotypical man.

At one point, a well-meaning associate suggested that engaging in more traditionally male pursuits might offer the boost of testosterone Tricia was lacking. She put this theory to the test by starting her own construction company, a career that paid the bills for 15 years but didn’t at all convince her of her masculinity.

“I was told I would have to start hanging around with super-masculine men if I wanted to get comfortable with that gender role,” Tricia remembers. “I was good at construction, but it didn’t really change me, and I got burnt out on it.”

The marriage also ran its course eventually, a welcome turn of events that finally convinced Tricia to live openly as a woman for the very first time.

Relief was fleeting, however, as Tricia entered one of the most challenging stretches of her professional life. She spent time as a math teacher, an actuarial analyst in the health insurance industry, a children’s services worker for St. Louis County, even a barista. Every year or two brought a new employment situation, but no respite from her ever-intensifying mental health symptoms.

“My depression and anxiety eventually got the best of me. I started making mistakes and struggling in my work. That’s when things started to fall apart,” Tricia recounts. “I couldn’t even get through my Starbucks application; a counselor from Goodwill had to complete it for me. The anxiety and depression made it to where I wasn’t really functioning anymore.”

That same job counselor from Goodwill referred Patricia to the Starkloff Disability Institute (SDI), and although her work schedule didn’t permit her to participate in the Capstone Course, she still took advantage of a Networking Bootcamp and one-on-one coaching sessions with Susan Menhard and Jason Hartsfield, SDI’s Career Academy Director and Adult Career Services Coordinator, respectively. Tricia was still prone to bouts of depression and thoughts of suicide, but the SDI connection seemed to foreshadow the fulfilling livelihood she would later enjoy.

Tricia’s next job led her to Covenant House of Missouri, a facility for homeless youth in St. Louis. Extreme poverty, drug abuse, violence, human trafficking – the circumstances don’t matter. Covenant House provides shelter and a full complement of support services in a loving, familial setting. But as a case manager, Tricia was expected to police the residents in a way she was never comfortable with.

After nearly a year of feeling undervalued and ill-suited to her role, Tricia was once again ready to give in to the ever-present burden of depression. But relief soon came from an unexpected source.

To celebrate her first full year as CEO of Covenant House, Jessica Erfling decided to sit down with each staff member individually for a 30-minute get-to-know-you session. But she didn’t know what she was in for when Tricia entered the room.

“She asked how I was doing and I broke down. I disclosed everything. I told her about how I felt unappreciated, how I felt there were no opportunities for advancement, that I was just stuck and really hopeless,” Tricia remembers. “I couldn’t believe I was sharing all this with the CEO, but she was really nice and understanding.”

If Jessica felt ambushed, she didn’t show it: “Tricia, I’m really glad you’re still with us, and by the way, there’s a job opening we’re about to post. It would be a promotion for you, and I think you should apply for it.”

It was the best advice of Tricia’s life. As Career Partnership Coordinator at Covenant House, she now assists young people with resumes and applications, prepares them for interviews, and fosters crucial relationships with area employers. It’s the role of a lifetime, and she loves every minute of it.

As anyone who lives with mental illness can attest, however, the struggle is constant. No matter how good things might seem, depression and anxiety are permanent hitchhikers, not always causing a wreck but always along for the ride.

Tricia sometimes jokes about how misery and thoughts of suicide conspired to land her in the job of her dreams, but she remains vigilant just the same. While there’s no convenient workaround for mental illness, Tricia is eternally grateful for being able to live and work as her authentic self.

“There’s not an accommodation for it; I just fight through it. It’s just something I live with every day,” Tricia acknowledges. “But I work for a nonprofit where we confront mental illness every day, so regardless of what it’s like in the rest of the world, I’m in an environment where it’s safe to disclose a disability, it’s safe to be who you really are.”