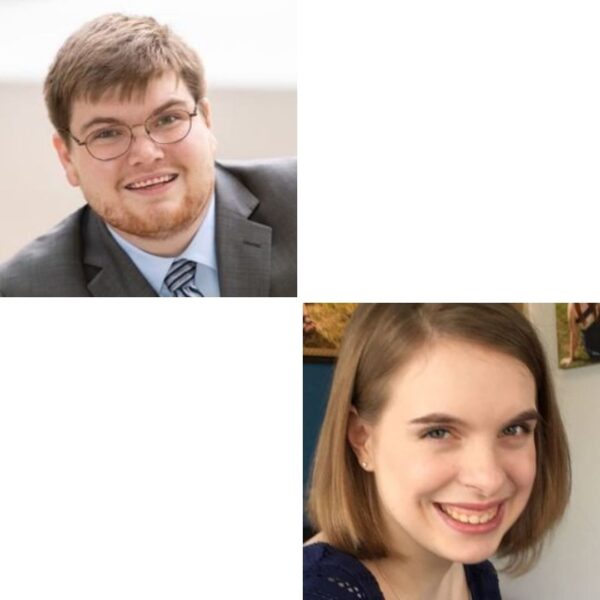 Each year, the Governor’s Council on Disability (GCD) presents its Youth Leadership Award to Missouri residents with disabilities who embody excellence in leadership, advocacy and service to their community. GCD recently announced its award winner and honorable mention for 2020: Both recipients have ties to SDI’s Access U program.

Luke Barber is the GCD Youth Leadership Award winner for 2020. As a founder of the Able-Disable Partnership at the University of Missouri-St. Louis (UMSL), Luke first became involved with Access U when program coordinator Katie Fields began doing outreach events on campus. In addition to his advocacy efforts as a public policy and social work student at UMSL, Luke works as a self-determination instructor at Easterseals Midwest, serves on the St. Louis County Commission on Disabilities, and ran in the 2020 general election to represent District 89 in the Missouri House of Representatives.

Despite his extensive community involvement, the award still came as a surprise to Luke.

“I’ve done some work with GCD before. They’re known for their legislative education projects, and I did their Partners in Policy program in 2018,” Luke explains. “I knew there were lots of nominees at multiple levels, so I’m still sort of shocked that I won it.”

As a community leader with autism, Luke regularly fights for Disability Rights and prides himself on being fully engaged with the political process. When he learned that no democratic candidate had emerged to challenge District 89’s republican incumbent, Luke didn’t hesitate to throw his hat in the ring. Running on a platform centered on Disability Rights and inclusion, Luke won 40 percent of the vote, not quite enough to win but more than enough to get the attention of local officials.

“I ran into Sam Page at an event and we were talking about my experience with intellectual and developmental disabilities and my history as an advocate,” Luke recalls. “After I lost in the general election, Dr. Page made my appointment official and it was unanimously approved, so I’m now on the St. Louis County Commission on Disabilities.”

So far, Luke is thoroughly enjoying his service to the commission.

“We’ve been working on a Universal Design ordinance, and we’ve done quite a bit of work on vaccine outreach,” Luke states. “There’s also talk about working with some of the taxi companies in St. Louis County to help them become more accessible.”

Luke still thinks about his bid for a seat in the House of Representatives. For a young democrat in a decidedly conservative district, Luke ran an impressively competitive campaign. The result was encouraging enough for Luke to begin contemplating another run in 2022, but he says plans are still very much in the exploratory phase.

When he’s not working on campaign strategy or policy initiatives for the commission, he teaches self-determination classes at Easterseals Midwest. For Luke, it’s the ideal opportunity to mentor the next generation of disability activists and community leaders.

“My job is to teach people with disabilities about their rights, responsibilities, basic leadership skills and how to make sound choices in their own lives,” Luke explains.

Honorable Mention for the 2020 GCD Youth Leadership Award also went to an Access U participant, Olivia Apollo. As a Connection Leader at Webster University and a volunteer counselor for Dream Big Career Camp, Olivia has touched countless lives through her unwavering commitment to disability advocacy and selfless spirit of service. Even so, she was caught off guard by the sudden recognition.

“I had never heard of the Governor’s Council on Disability, and my nomination came as a surprise,” Olivia recalls. “I didn’t know anything about it until a woman from the council, Claudia Browner, called and told me I had been named runner-up.”

Born with cerebral palsy, Olivia learned to take ownership of her disability from a young age. The constant therapy sessions and cumbersome mobility devices that initially served as uncomfortable reminders of how she was different eventually just became part of her identity, an identity that was growing ever stronger and more self-reliant. By the fifth grade, Olivia was sitting in on her own Individualized Education Program meetings, unwilling to leave her academic future solely in the hands of others.

Olivia credits her parents with creating an environment where she felt safe and supported, even as she found new and adventurous ways of challenging herself.

“They always told me that if there’s something I want to do or go after, I should try it,” Olivia reflects. “They would say, ‘We might have to change or adapt certain elements of how it works, but we’re not going to say no or hold you back’”

Her parents were true to their word. Olivia began studying Chinese language and culture from an early age, and when her school selected her to visit China as part of an exchange program, she jumped at the opportunity. Some of her teachers expressed trepidation, believing the whirlwind tour of such an inaccessible place would be too physically taxing on Olivia. But she confronted the task head-on, going to extraordinary lengths to work herself into peak condition.

“I had been studying for two years and it was something I really wanted. If I could just prove myself and be ready, then no one could take it away from me. So I trained for many months. Lots of physical therapy and extra exercise,” Olivia recounts. “I treasure the experience. It was very transformational for me. I came back so much more confident because I had proven to myself that I could do anything I wanted.”

So Olivia became the first student with a disability from her school district to embark upon a study abroad program. In fact, Olivia was so thrilled by the experience that she did the program again two years later.

College put Olivia’s confidence to the test in a whole new way, however. Admittedly apprehensive about her transition to Webster, Olivia found support and guidance in the university’s Connection Leaders, student mentors who help incoming freshmen acclimate to their new surroundings. Olivia was so appreciative of the Connection Leaders and their impact on campus that she became one herself the very next year. She saw it as the perfect way to give back to her college community.

As a counselor during Dream Big Career Camp in 2020, Olivia helped mentor high school students with disabilities as they prepared for their own college journeys. Although Olivia is modest about her role in career camp, her lived experience, disability pride and positive energy provided a tremendous example for Dream Big students.

“I never really set out to be a role model exactly, but I do feel a level of responsibility to be a helpful mentor,” Olivia concludes. “I was fortunate to have some friends and role models with disabilities growing up, and you really need that to form a healthy sense of who you are and what you can be.”